Hubert called the other day.  He was real upbeat.  Most of the time he calls when he needs cheering up.  Lois died a few years back, he is lonely and can see the cemetery where she is from his home.  He has made all his final arrangements and we will be notified if he dies. He doesn’t like to talk about Carnival life anymore…but he does talk about Lois, his neices in Iowa, fishing and life in Oklahoma.

I understand that Hubert was different when he was younger.

He had a wife named Wanda and two children. One day Hubert caught his wife with another man. Hubert had a gun and he shot Wanda in the leg.  Hubert went to prison. They got divorced.  Hubert was estranged from his children…and as far as I know he still is.

Hubert married Lois after he got out of the slammer.  Hubert went back out on the road.  He was the best “Wheel Man” you could find.  Far Guy worked the top of the wheel for him, a very dangerous job.  They were with Merriams for years. Lois worked in the Office and was in charge of the Ticket Sellers.  They left Merriams in 1971.  They went over to Midway of Fun.  We went to vist them in Winter Quarters near Detroit Lakes Minnesota.

After a few years they bought a Swinging Gym and went independent.  I am not quite sure what happened next…somehow they were bilked out of a bunch of money.  They retreated to Oklahoma.  I lost touch with them for a number of years.  Then one day I wrote a letter to the Cafe in a small town near where I thought they lived, the mailman happened to be in the Cafe and dropped the letter off for them…the phone rang later that day.  We had a wonderful phone visit…and many more after that!

Lois asked me to help locate Hubert’s children.  I helped to locate them, they wanted nothing to do with their father.  That made me sad, and it made Lois sad too…but there was nothing we could do about it…we never told Hubert of the search or the outcome.

In my opinion those kids are missing out on knowing a better version of their Dad.  Time is getting short as Hubert is now in his 80’s. 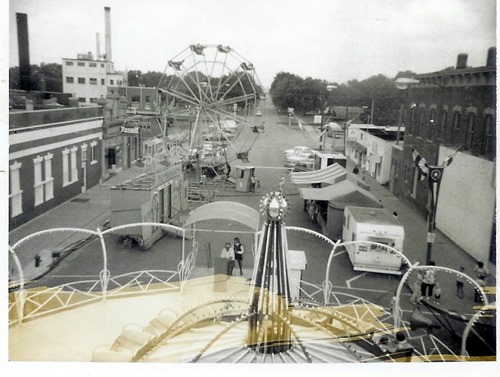 A photo I took from on top of the Slide in 1970 or 1971.   The Trabant is out in front. The Boss is at the controls.  On the left is a Side Show, Swingin Gym and the Wheel.  On the right is the Office Trailer, Kenny’s Joint (Darts), unknown joint and the Hot Wagon. This photo was taken in Schuyler Nebraska with a little Swinger Polaroid Camera.

Lois was very brave to take a chance on marrying him after he shot his first wife. It was kind of you to find his children but understandable that they didn't want to see him. Violence like that is life-changing for little ones.

You know the most interesting people. I too wish that people could forget such mistakes in their past and, as you said, allow them to get to know a more gentle version of their parents. And what a great story about getting in touch with him again. Somebody's guardian angels were at work, I think. :-)

I have to add my two cents here. I knew Hubert and his family well. His son Jerry was just a couple of years younger than I. I was there the time in Preston Minnesota when the Lone Ranger gave Jerry a silver bullet. I wonder if he still has it. I suppose Wanda sold it. I did not care for Wanda, I thought she was an evil sort of person. As for Hubert, yes he made a mistake but that night. Another person I know real well was there when it happened so there is more to the story than he just shot her. Hubert was sentenced to five years in the penitentiary. During that time there were prison riots but Hubert would go back to his cell and stay there until it was over. I think it's a crime his kids have been poisned against him.

It's always sad when families are hard hearted to each other. Bless you for remaining his friend.

There are many sad stories of children and parents separated for life. Kids have been fed a line and it becomes part of their life.

I'm glad you wrote the letter to connect with Hubert and Lois. I wish I understood why people carry grudges for so long. It's wasted time. My heart breaks for Hubert. Lois was a sweetheart for wanting to ease some of Hubert's pain and find his children.

I hate that his kids don't want anything to do with him. So sad! Especially when if she hadn't been cheating he wouldn't have shot her. Too bad they wouldn't give him a chance.

People mellow as they age. I saw that in my step-father and also they've only heard their mother's side for years. It's sad....people need to forgive and move on. There's goodness in everyone but I have noticed that men seem to have a harder time with rejection and what's up with shooting everyone nowadays? But I digress....I've always felt that those that are the hardest to love need love the most. Not sure I agree with Paula's rational....I don't care what she was doing.....he had no right to shoot her! I'm not sure I would want my children or grandchildren around someone that would do something like that. I would definitely "pat him down" before he visited me. There's another saying by Maya Angelou..."when people show you who they are believe them"...that goes for the Mother too!