Just the word Spot brings up a few memories.  The first most towns were “spots,” Carnies would say that was a lousy spot or I cannot wait to get to the next spot!  The second belonged to a very old man I met.

I wonder if Spot had a real name?  Certainly his Mother did not name him Spot.  Spot was old ( maybe 65 when I met him.)  He came out for the Kaffee Fest in Willmar Minnesota.  I was introduced to him in a small cafe with those swivel red stools…Spot swiveled around on his stool to smile a partially toothless grin and offered his hand.  He was deeply tanned and had a large mole with several long dark hairs inhabiting a spot on his temple.  I wondered if that was why he was called Spot?  He was a little bit of a man, about five feet four inches tall, he wore tan pants and a cotton shirt and striped socks that has long since lost their elastic.  A partially bald head was covered with one of those summer hats with a little feather on the side that was popular back in the 1970’s.

Far Guy says he thought Spot was from Southern Minnesota, near Pine Island, he had land there and one time The Boss, Paul and Far Guy went out there to get a part for a ride. Spot was a collector of many things…mostly carnival “stuff.”

The last time Far Guy saw Spot was in Cannon Falls Minnesota he was sitting on the platform of the Merry Go Round sleeping in the sunshine with his mouth open.  Far Guy laughed out loud and Spot opened one eye and looked at him like “Your day will come.” 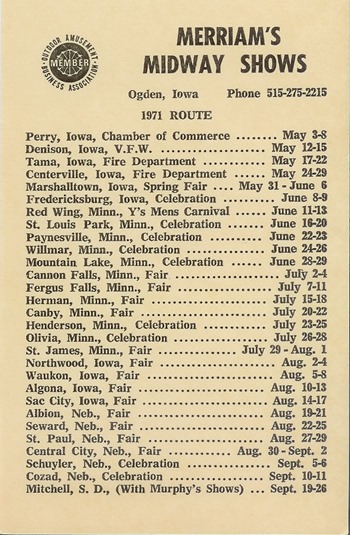 Loved that last paragraph. Sleeping on a merry-go-round with our mouths open...Perfect picture.

I loved that image, too -- old carnie, remembering, sleeping on the marry-go-round on a summer day ... real name unknown.

I'd love to be sleeping on a Merry-go-round right this minute. What a dream!!

Yup! Your day will come--ROFL! Funny how when we were young we couldn't imagine being as old as our grandparents. ;)

Yep, that last line was a good one!

Spot couldn't get enough of the life that he would have to come and get one more fix. Interesting story as usual.

Our day is here!