We have one Black/Brown Squirrel.  He lives on the west side of the house and has his home high in an Oak Tree.

Far Guy put an ear of corn out on the bench…one day he whispered to me “The Black Squirrel is eating on the cob….better grab your camera.”

The photos were taken through the window. 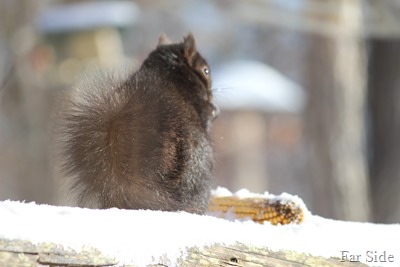 I think he or she is a Black/Brown Squirrel.  Having one normal gene and one mutant gene. 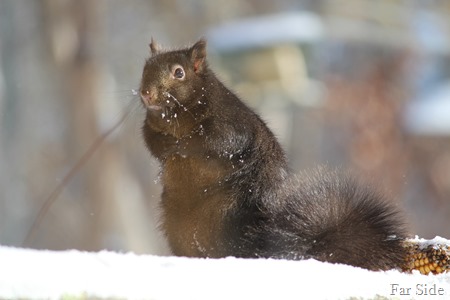 If he/she had two mutant genes he/she would be real dark black.

Shortly after I took these photos the cob disappeared.   The ornery old Gray Squirrels don’t like this Black/Brown Squirrel, they chase him/her.  BUT the Grays were not smart enough to sit up on the bench either…I hope the Black/Brown Squirrel got the cob!

There are some Black Squirrels in town, we used to have one at the Museum.  I have read that only 1 in 10,000 will be a Black or Black-Brown color.

Do you have any Black Squirrels in your area?

Labels: Black/Brown Squirrel, In the yard