I really tried to follow the Doctors advice and eat some yogurt.  Just the thought makes me shiver from head to toe.  Yogurt is not in the same category as cottage cheese…which is in the immediate vomit stage….gag a maggot cannot get it swallowed.

My other baby brother and she who sees Robins first suggested the Key Lime Yogurt (Chiobani) the one with the crumble off to the side…Far Guy had one spoon full and declared it inedible, I almost finished it off…Chance really liked it.

One day I had some caramel flavored yogurt something or another it wasn’t too bad.  I must have elderly taste buds…at their advanced age they don’t like anything new.

Far Guy eats yogurt just about everyday for lunch.  He likes the plain old store brand Raspberry or Blueberry Yogurt…nothing exotic or Greek for him.

I am not very adventurous with foods…I often think it would be fun to be a food judge on one of those fancy smancy cooking shows.

Our big food adventure this week was Asparagus…I roasted them in the oven with a bit of Olive Oil and Parmesan Cheese…they were really good. But then I like asparagus.

I like mango too and they looked and felt good in the store…not squishy but firmly ripe.   I topped it off with some kiwi and it was our different fruit for the week.

I prepared French Bread to toast under the broiler…filled the whole house with smoke…Jennifer said “Just like old times Mom.” 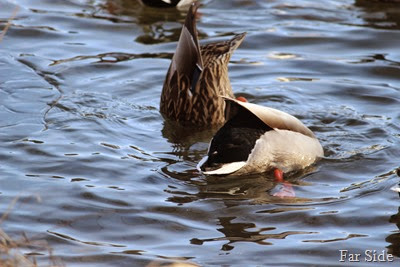 These Mallards Ducks are “dabblers” or “surface feeders”  they can reach up to 16 inches down into the water to get grain or corn.

Labels: cooking with Far Side always an adventure