We try to go to carving once a week.  A bunch of us meet in the basement of the library.  It is a good group, if you have a question someone will have a suggestion for you…we trade wood and stories.  Most of the time I am out numbered…but occasionally a few women show up. 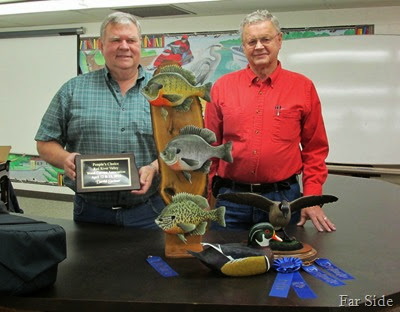 Dave won People’s Choice Award at the Red River Valley Woodcarver’s Association weekend in April with his trio of sunfish.   The Wood Duck won best in it’s division and it was carved by my cousin Chuckie (on the right).  Dave’s flying Canada Goose won a blue ribbon. 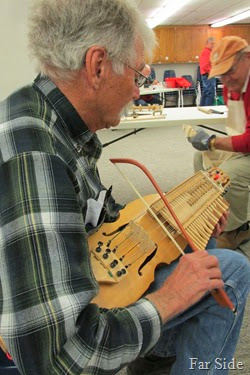 Bill serenades us from time to time.  He carved and built this Nyckelharpa, he is one of ten Nyckelhapa players in Minnesota.  He always says “I am one of the top ten Nyckelharpa players in Minnesota, but then there are only ten!” One time he left a Nyckelharpa for me to take to an event…and he gave me a quick lesson!   I could never be a player…too much stuff to remember.  Bill has a primitive mushers cabin over on one of the lakes in the boonies complete with a resident bear, fox and other assorted creatures. He used to keep sled dogs there…now it is just his occasional residence.

The snow bird carvers are filtering in after their winter in places warmer than Minnesota.  Everyone is working on something different. 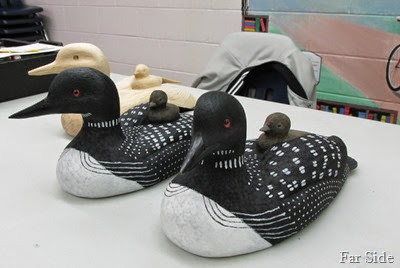 These are Chuckie’s Loons, over the winter there was an evening class and they carved this loon.  Far Guy has carved a loon before and I am no good at carving ducks so I am certain that it would be the same with a loon.  Chuckie carved three loons and will give them all away. 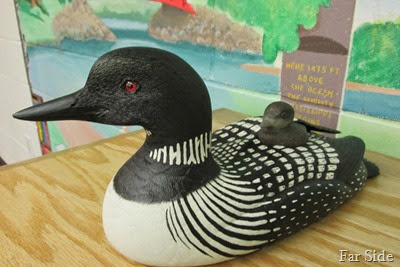 This is Rich’s Loon as you can see everyone  is a little different when it comes to painting!

Far Guy and I are still carving the 2014 Christmas Ornaments…every week the other carvers ask what the count is and shake their head like we are nuts…this week the count is 26. We may have to take a break and carve something else for awhile, goodness knows I have enough unfinished carving projects.

I still like carving the little houses out of Cottonwood Bark the best. 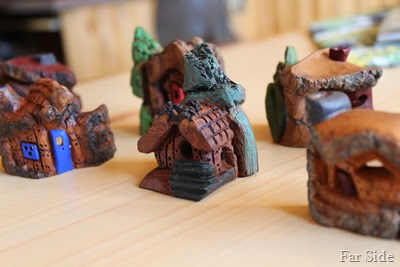 Each one is different.  No two are ever alike, I would be hard pressed to carve two alike.