We visited two cemeteries on Friday.  I have a box in the garage that says “Cemetery Flowers”  it contains silk flowers…pink and red.  We visited the two local cemeteries where we have people planted.

This year I wanted to remove some of the grass overgrowth on a few older graves that no one visits…Veterans…Great Grandma Abbott’s brothers.  We took a few butcher knives and a bucket to cut the overgrowth next to the slab.  Mission accomplished…the markers will look better after a rain. 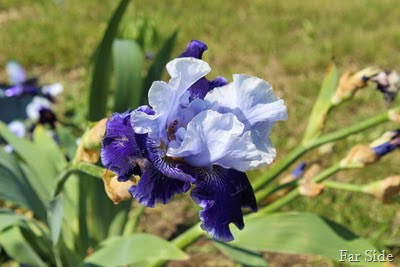 Found some beautiful Iris on a grave…and a lone bullet on the foot marker.  I knew the gentleman years ago.

I was tired after working on one marker…so I sat in the grass and took a photograph.

The sun was shining on my husbands maternal grandparents headstone… 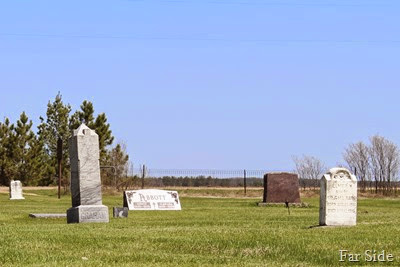 Of course the photo didn’t turn out as good as I would have liked.

Far Guys Uncle Willard’s headstone is in place.  Often times we would meet Uncle Willard at the cemetery when he was bringing flowers to his parents and grandparents graves…now we are leaving flowers for him…and taking over his flower duties.

My cousin Mark’s grave had no flowers so we left some.  He seems to have a very lonely spot in the cemetery.  Some times I wonder why he chose to be buried at that cemetery…his parents are buried elsewhere…but he made all of his own arrangements.

Far Guy did great helping me with my mission.  Flowers were placed near headstones for the weekend and on Tuesday or Wednesday I will pick them up again and put them back in the box until next year.  It is easier for the people that mow.

I have several other cemeteries that I should have visited, but for a number of reasons it was not possible this Memorial Day Weekend.

I am not certain who will bring flowers after we are dead and gone…no one most likely.