Last Saturday was very warm, and the pine trees started to weigh down the air with their pollen.  As you know Far Guy has battled Acute Bronchitis for over a month.  The pollen proved to be too much for him.  His oxygen sats plummeted.  I took him into the ER and they kept him in the hospital for four days.   His Doctor called his breathing problem a  “perfect storm.” They gave him IV antibiotics and steroids.

He is much improved and is listening to everything most things I say. 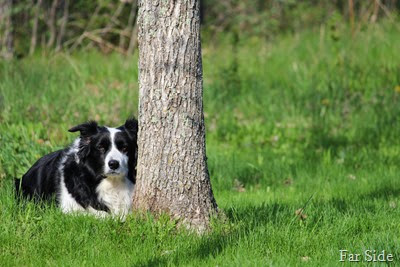 Chance, Miney and Little Elvis were in a real funk.  They couldn’t figure out what I had done with Far Guy…all they knew is that I took him someplace and I didn’t bring him back, that I would come and go many times a day and smell different. They were good company for me when I was at home to do a few things and play ball with them.

Little Elvis was delegated to lick my fingers or my toes every morning until I awakened.  He took his new job seriously!

Yesterday afternoon after Miney and Little Elvis went home ( their people returned from a vacation in Colorado) and Far Guy was settled I crashed on the couch and slept for three hours.  I didn’t answer the phone, I don’t know if it rang or not.

Far Guy enjoyed Room Service in the hospital, they cooked him whatever he wanted to eat, and his nursing care was excellent. I am cautiously optimistic that he is over the hump now…he says he feels about 75 % normal.  He sees his regular Doctor again next week, in the meantime he is still on antibiotics, steroids and an allergy pill.  We have the AC on since everything in our area is spitting yellow pollen, I will open the windows after it rains.