Have you ever seen a SnoBear?

I had not.  So when I saw one in a parking lot, I naturally had to get a photo.  I wondered what does a SnoBear do anyways?

I wondered if it was some kind of snow machine that gave elderly citizens  a chance to get out on the trails.  It was heated or appeared to be.  I wondered how many people could have a ride at once. 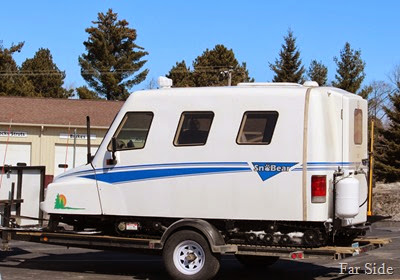 My wondering was interrupted by the owner, he said “I bet you have never seen one like this before?”   No I had not.  I made my guess and he laughed.  Turns out he is from the little village of Eagle Bend and purchased this vehicle second hand.  He asked if I would like to see inside?  Well of course I would!  He was a very nice gentleman, either that or he was used to old lady gawkers with cameras. 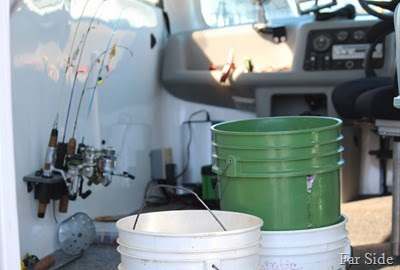 It is a fish house, he had been fishing over on Leech Lake.  This vehicle/fancy fish house is on a track and it can raise and lower itself by 14 inches.  Some models have bunks, so you can catch a nap or fish all night!  I didn’t see bunks in this one, it had two captains chairs. 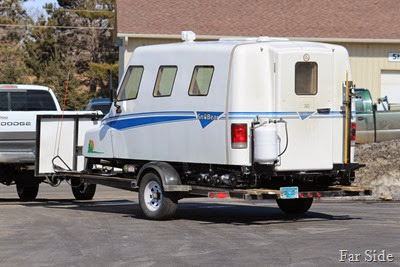 He was off to a new fishing spot!

Minnesota’s winters are way too long for many people.

Labels: cabin fever, What is it, Winter Fun

Good gracious. Not only had I never seen one before, I never knew that such things existed.

That is an amazing thing. I plan to show it to Tom.

Oh cool! Too bad he didn't take you fishing with him!

Wow, I never knew there was something like that out there. It is a nice way to go ice fishing though.

If a person wanted to go ice fishing (which I don't think I do), this would be the way to do it. You're right: Minnesota winters are way too long. :-)

That is seriously warped. LOL I've never understood ice fishing people, and yet I know it's all the rage here in WI and in MN, with ice 'shacks' all over the frozen lakes.

Cool! it reminds me of the old bombardiers which traveled over snow and carried freight or passengers. One winter one was used as our school bus. No worry about roads...just drive across the fields!

If you have a hobby, you might as well be comfortable while you are doing it!

That sure is a fancy fish house!

Made me think a little bit of the vehicles they take tourists out in to view the polar bears in northern Manitoba, although those vehicles are much higher up.
If I was to be dragged out to go ice fishing, I'd want it to be in one of those:)
Doesn't look wintery at all in your pictures, well until I spied some dirty snow piles in the background.

It sure beats a little wooden shack pushed out on the ice!

I would of never guessed! I will have to show the hubby this one. Him and the son love to go ice fishing, even though they don't get to go very often.

That is way cool...I need one of those!

Cool! So is it safer than a regular fish house? Like would it float if it went through the ice. I liked your idea though too for going on the trails but in an enclosed snow mobile with heat! LOL! And hot cocoa and some snacks.....must be getting near lunchtime....I'm thinking of food.

Nope, I didn't guess right either. I thought it was a snowmobile bus sort of thing with something missing underneath and it was trailered for repairs. I have seen some palatial fish houses, but nothing like this one.

I can put one on my SOMEDAY when I win the lottery list! Thanks

I have seen some different snomachines but not sure about that one ~ pretty neat!

What a neat little house. I never would have guessed. I'm sure we will never see one here in NC.

Cool. Even in the summer, Minnesotans are dreaming up better ice houses for the next season!!!

How fun! So happy he shared with you so that we could see this.

Now that was cool!