Recently we had a chance to stop by the Arago corner and take a photo of the historical marker there. 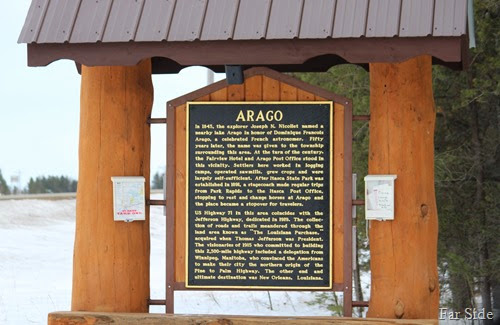 In 1843,the explorer Joseph N. Nicollet named a nearby lake Arago in honor of Dominique Francois Arago, a celebrated French astronomer.  Fifty years later, the name was given to the township surrounding this area.  At the turn of the century the Fairview Hotel and Arago Post Office stood in this vicinity.  Settlers here worked in the logging camps, operated sawmills grew crops and were relatively self sufficient.  After Itasca State Park was established in 1891 a stagecoach made regular trips from Park Rapids to the Itasca Post Office, stopping to rest and change horses at Arago and the place became a stopover for travelers.

US highway 71 in this area coincides with the Jefferson Highway, dedicated in 1919.  The collection of roads and trails meandered through the land area known as “The Louisiana Purchase,” acquired when Thomas Jefferson was President.  The visionaries of 1915 who committed to building this 2,300 mile highway included a delegation from Winnipeg, Manitoba, who convinced the Americans to make their city the northern origin of the Pine To Palm Highway.  The other end and ultimate destination was New Orleans, Louisiana.

I think this marker is maintained by The Scenic Byways Association, there are maps of the Jefferson Highway, information and a place for comment cards.

While I was the curator at the Historical Museum there was a program about this highway.  They are having a huge “to do” in Park Rapids this spring all about the Jefferson Highway.

The Jefferson Highway is also called The Pine to Palm or the Blue Road.   It’s counterpart is the east and west Red Road or The Lincoln Highway which spans from Time’s Square in New York City to Lincoln Park in San Francisco.  The Red Road was dedicated in 1913.

Some of the Jefferson Highway enthusiasts are painting JH on a white field with blue bands on power poles.  Others just did their own thing like this small wooden sign at the Arago Cemetery which is just south of the historical marker.

We like to stop at all the historical markers we come across, sometimes we don’t have time to stop, but we always enjoy a bit of history when we do.

I am behind on reading! Enjoyed the history lesson. It's fun to see the historical markers in other states. I took a few pictures while in town yesterday. Also, I plan to do that "bag a day of stuff"! I love that idea! Sorry to hear you're knee deep in snow again!

I've never heard of the Pine to Palm highway, but I would enjoy driving its length!

Thanks for this bit of history, something I would never have known about if it wasn't for you and your blog. Just appreciating you right now. :-)

It's very interesting that major highways were built across the country when cars were still quite simple. One would wonder what type of road was constructed. Paved?

Yes the Lincoln highway is north of us. I was surprised to run into it when we went to the funeral in western Iowa where it turns going down to go through Omaha. The crossroads of highway 34, east west and highway 69, north south, was Osceola, Iowa's claim to fame for a long time. Now the Interstate has diminished its importance. The railroads north of us travel along the Lincoln. That is a nice sign you are showing that really gives good info rather that one or two sentences. I will have to look up 17 and see where it goes.

We generally stop and read those sort of markers as well. It's all quite fascinating, and gives you a sense of how things once were. There was a Fairview with a Fairview hotel just out of Oliver. Now it is just a historical site with a few signs and some walking trails.

I knew about the Lincoln highway and recently watched a documentary about it, but this is the first time I've heard of the Jefferson highway. Interesting.

Highway 71 runs very near our house. :-)
Hope you get some warm weather soon. Have a wonderful week!

I love history. I did not know this. Thanks.

I pray there are always persons who love history and know how to share their knowledge in an interesting way like you do.

I like to stop at historical markers too, and learn about events that happened in that place in the past.

Very interesting and I appreciate you sharing the marker with us.

I can't pass a historical marker without stopping. This was a really interesting one as I'd not heard of the Pine to
Palm highway. I'm off to find a map!

I JUST LOVE THIS!!! It's so fun to see the history of our world.