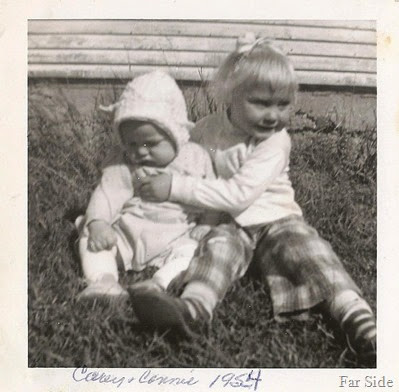 This is Carey and I in 1954, see how supportive I am of him, making sure he doesn’t fall over in the grass. 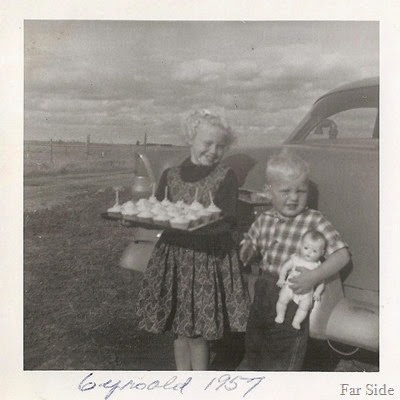 I don’t have many pictures of him on his birthday but I have just a few on my own birthday!  Here I am holding the cupcakes and he holds my doll…probably what makes him such a good Dad and Grandpa.  In 1957 I would have been six and he was three. 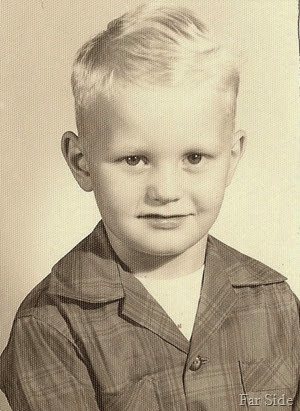 I am not sure when this one was taken, maybe about 1959.  Our Mother sewed our clothing, and I can tell that she sewed that shirt…I am trying to remember what color it was…I think my Dad had one that matched.  I think green…

I was might have been a bossy big sister.  I tried keeping him out of trouble.  Most of the time we got along pretty good, there was that one time when I stabbed him in the foot with a pitch fork…not sure why I felt compelled to do that…I think he was going to tattle on me … and a pitchfork to the foot will stop you in your tracks and make you forget lots of stuff.  I guess he must have recovered.  I might have waited on him hand and foot like the time he stepped on the bullhead at Shell Lake and got blood poisoning…he laid on the couch for days that time with a towel and a plastic bag around his leg, Dreft soap soaks helped to draw out the poison.  I thought for sure he was going to be a goner that time…but  he survived that too.  ( He stepped on that bullhead all by himself, I didn’t push him or nothin’, I even let him use my shoulder for a crutch as he hobbled back to Uncle Hugo’s house.)

I am possibly the best older sister he has!

Well I am still laughing at Red's post and now you've got me going again! A pitch fork! He was such a cute, sweet looking boy! Happy birthday, Carey!

I've also got a baby brother born July 1954 - he's not very happy to be nearly 60!
He has three older sisters so I don't think he really missed me when I lmoved away and married when he was nearly 7. There were still 2 sisters at home to spoil him and spoil they did - as well as being the baby of the family, our baby brother is our only brother.
Love the protective arm round the baby doll lol
Cathy

Your memories crack me up. Typical brother sister relationship. You sound like you were one terrific big sister.

Happy birthday to your "baby" brother on his sixtieth birthday. Starting into that seventh decade and he STILL has a big sister who loves him. :-)

Aren't they sweet photos?!
(ツ) from Cottage Country Ontario , ON, Canada!

Birthday wishes to your Brother, I love those old pictures, so great, Blessings Francine.

I loved this post! Happy birthday to your brother!

I "goggled" bullhead and saw pictures of a fish. Is it poison? Connie, please give us a lesson about Bullheads...never heard of them.

:) Happy Birthday dude! Glad you survived the Bullhead scare. Do you still have pitchfork holes in your foot?

I betting your the only sister he has, ha ha! You two little towheads sure were cute!

What great stories you have of your childhood and it's really a miracle that your brother is alive after stepping on the bullhead. His feet sure took a beating - - - whether accidentally or on purpose. Glad there is another one who has joined the Sixth Decade Club.

You two sure were a pair of cuties. Happy Birthday to your brother!

He's a real cutie...you did a good job of being a older sister.

I was the rather pushy older sister, myself. But we, obviously, did good as both our brothers (and my little sister) are alive and well--LOL! ;) Such cute pictures of you guys!! Your mom did an excellent job on that shirt, too. :)