I am transcribing the 1916 Farm Diaries that were left behind by Far Guy’s Paternal Grandparents.

Most days Grandpa writes, his penmanship is horrible, thanks to a magnifying glass I am getting the main thoughts.  The days Grandma writes it is much easier to decipher.

There are 13 years of diaries.  We can all say uffda together now…one month at a time!

So far we learned exactly when they moved from the farm south of Park Rapids where Marvin (Far Guy’s Dad) was born.  We knew they moved in 1916.

I would have never guessed they moved in February.

16 Wednesday Moved over to S.R.R. at Japs for dinner and night. (Jasper was married to Minnie Grandma’s sister and they called him Jap.) We still haven’t figured out what S.R.R. stands for, we think it is  Shell River..Road??

17 Thursday Fixed up around the place. Up to Japs for meals. (They must have lived close by…I always thought they lived in Iowa)

18 Friday Stayed at Japs, brought Tracie and Marvin down our first night here.

19 Saturday unpacked things and straightened around got some wood.

I wish there was a photo of what the farm house looked like when they moved.  There is one photo taken in 1917. 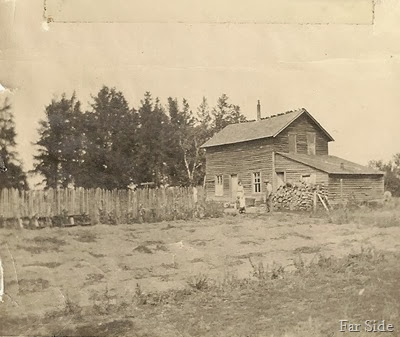 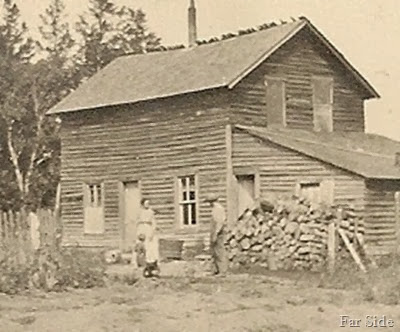 This is most likely Tracie (Grandma) and Jim (Grandpa) and that is Marvin (Far Guy’s Dad) right in front of Grandma along with a faithful dog.

During the year Martha Jane (Grandpa’s Mother) visited a few times, she must have come from Iowa on the train.  Grandpa’s brother Bryan stays at the farm sometimes and is in Park Rapids other times, I get the impression he worked as a farm hand.

It is wonderful for us to have the opportunity to have a glimpse into farm life 98 years ago.

How wonderful to have such a personal family record available. What a truly valuable document (or documents), - real treasure.

We have lots of old pictures, but no names, no information at all about the people in the pictures. And now there is no one left to ask! I enjoy you posts!

How cool!! :) I got excited just reading the "notes" they wrote back then! The SRR and such will be a challenge but make it all the more interesting to transcribe!

It would have been nice if my relatives had done something similar. You are so lucky to have theses "treasures". Good luck with the transcribing.

I kept a journal for about the same length of time. It's interesting to look back to see what I thought was worth writing about in 1983. Now to see what someone wrote about seventy years before that, now that's really interesting.

Wow!!!! love these old pictures, so interesting to me, Blessings Francine.

I'm always fascinated with daily life of ordinary people long ago. Extra fun when it's family.

Wonderful old photos and story to go with them ! Thanks for sharing Have a good day !

Wow, that is amazing. Love the old pictures and the diary! It must be wonderful to be able to have the history.

It certainly is. So much connection to the past..I love it

What a treasure! and good for you for taking on such a big job!

How nice to have the diaries to go along with old photos. I have a lot of old photos but would be nice to know more about them. So fun to know where you come from :)

How interesting and I love these photos.

Those photos give us an idea of just how much hard work went into keeping up that house and farm. Amazing what people could achieve. We are so spoiled...

Wonderful photos of the farm. Is it still there? I have written a journal for over 20 years...pretty boring I imagine to most but maybe someday someone will appreciate it like you do your family's writings. Can you imagine how cold their winters were without central heating? My Mother was born in 1915 and she said they warmed up bricks and stones to put at the bottom of their beds wrapped in blankets to try and warm their beds because there was no heat upstairs.

Yes the farm is still there, a new farmhouse is there now and it now belongs to Far Guy's Uncle.

You are very fortunate to have this window into the past.

Oh gosh I am so jealous that you have these diaries..how wonderful! Almost every single male in my ancestry was a farmer...all lived simple lives. If they wrote journals or diaries I was not one of the lucky that inherited them. The photos of the farm are fantastic.

Transcribing the diaries is a labor of love. Your Grands are going to enjoy learning about their ancestors.

It really has to be an interesting task. We found one simple diary in the old house my dad tore down. It inspired my mom to write each day for so many years. I don't really want to read them and maybe the grand kids will. It is interesting to find out bits and pieces of the past while you read an ordinary life story.

I'm fascinated by these kind of personal journals and diaries! Having a picture or two to go with them is an added treat. :)