In days past Monday was wash day.  I used to have the dish towels that proved it...I could count on taking Tuesday off because that is ironing day and Wednesday too as that is sewing day.

Yes I wash on Mondays, but then I wash on others days too cause I don’t have to heat water and lug it to the washer or use that wringer. 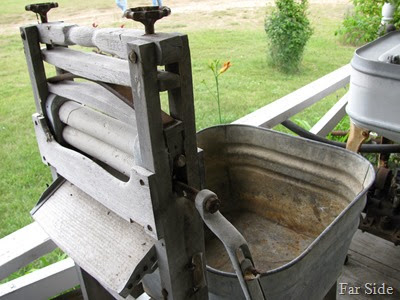 This is a wringer stand that has a wash tub on both sides.  This wringer was adjusted by the knobs at the top and you provided the power by turning that handle.

A wringer was why ironing day followed wash days…they made terrible wrinkles in clothing. 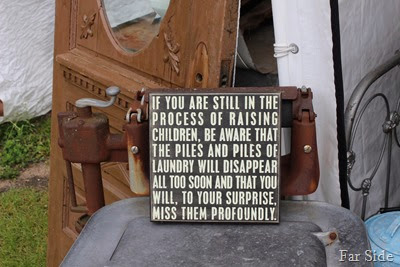 My Mothers wringer washer was like this one minus the sign.  Electric it was.   With lots of warnings that you didn’t want to get any body parts going through the wringer.  We had an old soaking stick that we would use to fish the clothing up out of the washer with…it was all slimy and soft on the pokey end.  We poked clothes up near the wringer and watched them get rung.

When I was about 7 years old maybe 8 I have a very vivid memory.

It was a sunny day and we were on a fairgrounds someplace in Southern Minnesota or Iowa, we were seated in the grandstand.  We were watching some kind of show…there were clowns…running around acting clown like.  At one point they wheeled out a wringer washer and one of the littlest clowns got stuck in the wringer and came out on the other side flat as a pancake.  The crowd roared.  Of course the child in me was traumatized by such an event and after that I was really really really careful around the wringer.  I realized later as an adult that no one would fit in a wringer, it was some slight of washer trick.  Perhaps it was revealed at the time..but I had my eyes closed tight.

Now..does anyone else remember this slight of washer trick?

Shortly before my other baby brother was born in 1960 my Mother got a fancy smancy washer with a spin dry compartment.  I was so relieved not to have to worry about that wringer anymore.

Oh look at that - not quite the same but my Granny who lived in Belfast had a huge great thing callled a mangle. It had enormous rollers and the handle seemed to be attached to something about the size of a hub cap which was also attached to the side of the machine. No way would I go near it - like the one in your picture it had a tension screw on the top (just one) and I could just see my hand going between the rollers if I did help out.
Meanwhile my mum used the local laundrette till dad forked out and bought her a twin tub - yes the washing machine with a spin drier side by side. Oh memories - whatever would we do without them LOL
Take care
Cathy

Morning, oh ya, brings back many childhood memories those old washers. Thanks, Francine.

It's so often the day-to-day things that illustrate how much life has changed.
Yes, I do remember that skit with clowns and a wringer washer. Kids are so literal and we don't realize sometimes how things like that can affect them. Great story.

Somehow I missed the memory of the washer but not the ironing. It was the job of the grandchildren to learn to iron on Grandma's aprons - - which she had rolled damp in the refrigerator. She also had a Coca Cola bottle with a "sprinkler" top inserted in the neck.

Yes, we had a washing machine with the tub on one side and the wringer on the other. Also had the soaking stick for storing the clothes and fishing them out. Then we got one with a spinner on the side instead of the wringer - had that for many years. It wasn't until I was in high school that my mother got a "real" washing machine. She was so excited.

I do remember how wringer washer and put rubber diapers through that wringer diapers and explodes and I ruined a couple of shirts
Did you ever get anything caught in a wringer?or ruined a couple of shirts?
I remember the wringer washer diapers wrapped around the wringer,If it does, an article of the wash may
wrap several times around a roller before it is noticed; unwinding such a
piece is often difficult, sometimes impossible without removing a roller .

Yes, I do remember! I like the modern washer and dryer better!

Well, I am in good company, having actually used a wringer washer fifty years ago. In Puerto Rico the home we rented had one, and I had never even seen one before that. I kind of enjoyed it but yes, I also worried about getting some body part caught in it. Poor little kid, traumatized by that "joke" -- I would have been, too. But it makes for a good story much later. :-)

My grandmother (mom's mom) had one in her living room. I remember being told "Not to play with it" which of course made me and my brothers very interested in it. We didn't "wring" ourselves (or each other). But we all thought the "dinosaur contraption" was kind of cool!

I remember something very similar in the forties as a child. And being told never ever to mess with it.....;)

We used one of those wooden paint stir sticks to push the clothes into the wringer. It wasn't until I went away to college that my mother finally got a modern washer and drier. I think it's because she didn't have us girls to do the wash on Saturday anymore. ;)

Never did see the sleight of washer trick but I saw many piles of laundry go through the wringer washer. My mom's was electric, too, but we did have to heat and haul water to the washer. Ah, the memories of Wash Day!

We had a wringer when we first got the house at the shore. As a little child, my aunt did get her finger caught, and it remained misshapen all her life!

My mum had an electric wringer on the farm when I was kid . She had a modern washer then but still liked to use the wringer and hung the laundry out side and never got a dryer till she moved to town lol ! How things have changed . My laundry day is Sat and come the warmer weather laundry will be out on the line flapping in the breeze drying ! Thanks for sharing great post and photos ! Have a good day !

haha. NO but you can never go down the drain…..the Mr. Rogers neighborhood song is famous

My grandma had an electric wringer washer and I was traumatized by her stories of those who had lost an arm in a wringer. I was at her house on washday quite often and I always held my breath until it was over and she was safe and still had her arms. I still have her washboard and laundry stick. Oh, memories! I can almost smell her Yardleys soap....

I can't remember having one of theses but I had friends that lived in Eagle River had one along with a wood heated oven/stove to cook on. Our washer and dryer now are made by Fisher Packel (New Zealand) and they are both top loaders and spin like an airplane engine!

I have been doing some memoir writing lately, and just yesterday I mentioned my mother doing the washing with a wringer washing machine. I remember being fascinated watching the clothes being squeezed and coming out all flat into a basket before they got shook out to pin onto the clothes line.

Oh, I'm so glad I wasn't a woman back then. I never iron anything!

My family never had one of those machines when I was growing up in New York. But I do remember being horrified, after I moved to California to attend college, when I met a young woman about my age who had part of one of her fingers missing. You guessed it: the flat-as-a-pancake act probably wasn't so funny to her, either.

Yes, it is really washday. Why is it so interesting? Everyone does it together, but in other parts of the world.

On wash days Mom was the only one allowed to use the wringer. Thank goodness I was the youngest and remember the excitement when we got a new washer!

I thought the ringer was really cool...even though I was warned again and again and again. So the second Momma wasn't looking I rung my hand. It took a long time to heal. My butt hurt also. I got the hurt butt first and then Momma fell apart looking at my hand. She took me in her arms and cried and cried. I remember thinking we were crying together.

I remember having a wringer, I'm not sure, but I think it attached to the sink and was hand cranked. Monday was also wash day. In the late sixties, approx, my mum got one of those washers with the spinner on the side. We had a clothesline and a clothes rack that lowered from the ceiling. No dryer until 1976, when my dad changed jobs and we moved to a house that came with it, and had a dryer. My mum still didn't like to use it, used it rarely, she had a clothesline put up. I raised two kids with cloth diapers and no dryer. Wash day was when the diaper pail was full, or if the weather was cooperative, and it was great when those two coincided. If it was windy, that was even better:)

No, I don't remember that trick. But I do remember the wringer washer we had in the basement--crank kind--and mom shaking out the clothes and hanging them on the clothesline in the backyard. The sheets and pillowcases smelled wonderful! In the winter the clothes got hung in the basement on lines strung between the rafters. And that reminds me of the lightbulb with the chain that used to shock you when you pulled it down there, too! My grandmother embroidered dishtowels with the days of the week chores on them. I couldn't remember when any of them were. Just that after wash day was ironing day. ;)