That brown time of year and project updates

I am not inspired by the brown world out there, none of the brownness excites me to take photographs.

I wore my red plastic boots outside and played in the mud with Chance.  I took him over to a snowy area to get cleaned off.  We lost a couple of balls.  We watched the birds and listened for sounds of spring.

We still have our usual year round birds.  Nuthatches, Chickadees and Woodpeckers. The snow stick stands at about 10 inches.

Far Guy and one of his friends went woodcarving yesterday to a shop in Moorhead Minnesota.  They wanted to visit and see what was happening at Larry’s.  Thursdays is open carving there.  Several Retired Air Guard guys are carving there so Far Guy had a good visit.

Chance and I spent the day doing odd ball stuff that never shows and playing in the mud.   Chance was certain that Far Guy was never coming back…he is so pathetic sometimes.

See how sad he looks? 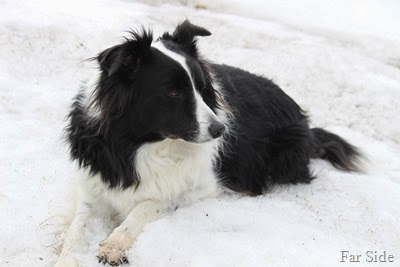 March 1st I made some goals for the month.

I hope to work out the kinks in a new Christmas ornament design…and then decide if it is possible to do 65 of them.  R & D is complete, it is possible.  I have purchased the paint and the string to use for hangers and Far Guy is cutting out the rough shapes and we have begun carving them.  Each ornament has six pieces so it is no easy project.  We are starting early enough that we should be able to complete them in plenty of time and perhaps even sell a few…in my humble opinion they are beautiful and will be hard to top next year.

Finish the afghan I started as a 2013 Christmas Gift for Jen. In progress but not yet done.

Have the annual snow stick contest on the blog.  The carvings are done. Just waiting for the snow to melt at the snow stick!

Work on Far Guy Military Scrapbook…it has been on my desk since New Years. It is still on my desk.

The Income Taxes have been completed and electronically filed.  The refund we get back will be spent all in one place…doesn’t take long to spend nine dollars.

I am still working on transcribing Far Guys Grandparent’s Farm Diaries it is slow going.

We had one exciting night out at the neighbors playing cards!  It was good to look at a different four walls.

Even though a lot of our snow has melted everything looks horribly brown. The grass has webs all over it from the snow - looks like mold to me. Most of my project are still on the table. Our taxes were done a month ago. We actually owed about $100 for the first time in over 30 years. We got some unexpected money this year (which was spent on my tooth implant) and that put us over the limit. Not happy about owing Uncle Sam. Have a great weekend.

We got a massive refund of $169. At least we didn't have to pay this year! The money just arrived in my checking account last week and I've already spent it. :-)

Congrats on getting the "just right refund"!! Why anyone wants to lend the Government their money, interest free for 4-5-6 months is beyond me! :)

I think it is important to have cheerful rain boots and your red ones certainly qualify. Mine have polka dots. :-)
I'm still waiting for that brown time of year. My yard and garden still have a good foot of snow.
Can't wait to see your Christmas ornaments this year.

Sounds like you are waiting for the snow to disappear and spring to put some green in your world. It will happen, hopefully overnight, and one day you wake up and it's spring.

No refund here this year - we have lost our dependents. Your ornament project sounds like a project - I am waiting in suspense :) Happy Friday - a snowy one.

I need to do taxes too...ugh...I so dislike that job. I think that's why I'm painting....to look at a different 4 walls also...at least cleaner. It's warmer here but you can't depend on it or the weather reports but the grass is growing and the daffodils are blooming but I'm just so tired I can't get excited about it. Coming out of hibernation is a slow process and very exhausting! LOL!

Hi Connie, I can't wait to find out about your Christmas ornament designs. You two are very creative.
Poor Chance.....he does look worried.
Hope you guys will have a nice weekend.

Yes refunds from the state will pay my federal tax. It is so fun watching them switch the money back and forth. It looks like spring but the wind nullifies it being nice out there. Hang in there and the mud will be ankle deep.

haha your card night and new walls comment is thoroughly appreciated here in chicago as well. I love your new woodpecker images up top.
Nine whole dollars? That's a sale skein of yarn I think

Ryker hates it when one of us is not home. Even though my guy works from home if I'm not there all is not right with his world. He likes his pack together at all times!

Waiting for snow to melt is like waiting for paint to dry. . .it will happen when it happens.

Anxious to see your new ornament design. It sounds intriguing.

I had a blizzard yesterday. Tonight it's going down to minus 17 C. Guess what? It's on the way to you!!!

Our refund of $1280 is already in my savings account, thanks to TurboTax. It will pay most of the first half of the property tax due next month.
Looks like you are making progress. My goal was to get through February and then March without hurting myself or going crazy. I have thought about having Tom help me set up for a sewing project, but can't get inspired. I decided to write my memoir instead. I don't really know what I'm doing, and I have no idea how long it will be, but I have started it, and it's fun to work on for an hour or so a day. It also gives me something to think about while I'm walking.

Red rain boots sound perfect!! I'm glad you got Chance to do something besides mope while FarGuy was gone a carving. It has to be wonderful to be making lists just for your own stuff (and not the museum's)!! Can hardly wait to see the new ornament design. All those parts--goodness! You'll be working on them the rest of the year, I bet. But they sound particularly awesome this year. Have a super weekend! :)

Doing something just a tad different is always a nice change. We are buried in work at the moment. Way too much to do and very little time to get it done in. Now Terry is off helping Shannon for a bit which gave me a tiny break in the work load.

Congrats on the progress on your list. I've been making lists too, always feels good to cross something off.