Dogs, each and everyone has captured our hearts.  All have been one of a kind. 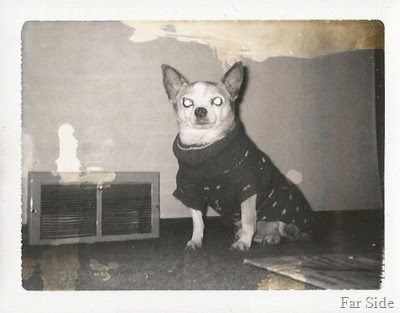 Here he is dressed in a sweater sitting next to the most coveted spot in the house.  That heat register was a spot where my sister in law camped out and also my children.  They would grab their blankets and hog all the heat coming out of that register.  I am not sure who bought this sweater for Muggy but it hung on the back porch for a long time after he died.

He had a good long life, what could be better than for a dog to keep you company and on your toes for many years and then succumb to old age.

The last time I saw Muggy I scratched his ears…his mind was gone and his body was failing and it was time to say goodbye.  I think my father in law sat by the cardboard box lined with blankets and towels that was Muggy’s home for days before the end came.

How do you sum up the good life of a dog?

Far Guy remembers how Muggy slept next to him with his head across his neck.

He was Far Guys Dad’s dog and was very protective of him…if you walked by and slapped him on the knee the dog would go ballistic.

The time he pooped on my foot during a very formal dinner.

How he loved to bare his teeth and growl at me and chase me from chair to chair yapping his head off.

The story about Ray coming to the door and making the mistake of opening the door to the kitchen…Muggy lept as far as he could and hung on.

Muggy was sent to the basement the day we got married because the house was full of company.  He ripped out a toe nail and bled all over the basement..everyone was late getting to the church.

He was happy being tied out to the clothesline where he could run back and forth and bark.

He always wore a harness.  He was a tad gassy and could clear a room, and also became the scape goat for anyone else with a little gas…blame it on the dog. 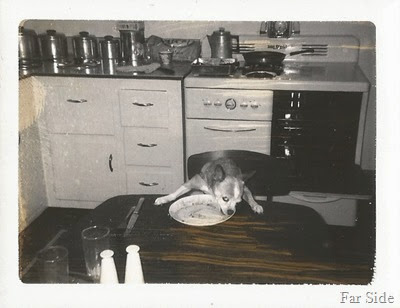 No, he could not jump up on a chair by himself…someone who shall remain nameless helped him.

Muggy was a Chihuahua, very spoiled, much loved and much missed after he was gone.

What a cute and beloved little dog. Pets sure add a lot of sweet memories to our lives.

My late brother in law had Jack Russels - no other breed was for him. When he died they put oodles of photos of Stan and the various dogs in his coffin with him. Not that he'd forgotten them but so he could have a good look and make sure they were the right ones when they met again!

And of course that should have been 'Jack Russells'!

I've had my share of pets. Still remember my first dog - mixed breed rescue dog. I loved that dog; she was my whole world.

We have had lots of dogs for pets, but it seems like they always end up going before their time. I am hoping that the two we have live to be quite old dogs. Our heeler will probably end up going first because of his injuries from an old accident.

They crawl into our hearts and never let go, do they? Love the story of Muggy.

Those little dogs are often big dogs in little dog clothes. They are often allowed to get away with things that a big dog wouldn't be. Sounds like Muggy was one of those:) Chuckled at the old stories of him!

Muggy sounds like quite the little character. So glad you have vivid memories of his antics!

Muggy was a performer and knew it!

Muggy was a "character"! Chance has some "tough acts" to follow! (But he's holding up his end!)

It is a good story of all the antics. The devotion that he to Far Guy's dad is so wonderful. The memories of past dogs can be so good and some not so good. Mostly all good.

What a character. He looks like he was well-fed, too. Or maybe it's just the sweater..."Does this make me look fat?" Good dog.

They take a special owner I think. Im afraid to hold most of them for their injections before neutering!

What a mighty dog little Muggy was!

Enjoyed your stories! We are dog lovers too. We've had nine dogs in 61 years, plus we've baby-sat, boarded and cared for sons' and granddaughter's dogs and daily let the next door neighbor's Schiz outside while her "mom" worked.
We like dogs.

Muggy sounds like a real character! Those are the ones we miss the most. :)