I have been trying to get my incoming shelves at the museum all cleared off.  One by one the boxes and bags are opened and spread out on my desk for photographs.  Some items  are rather curious. 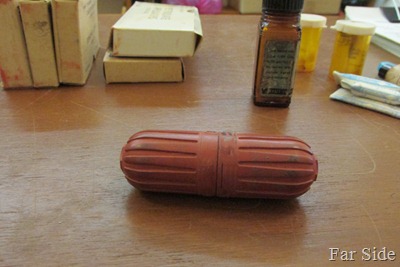 Some of the items in the background may help you make a guess.  All this “stuff” came in the same box.   This particular item is from the 1950’s and would not be used today.  In some parts of the country it would have been used more than others.

It was something I have never seen before.  I hope no one out there has used this mystery item, but if you have used it please tell us all about it!  I will add a photo of the reveal later in the day.  Guess away:)

You all were good guessers! 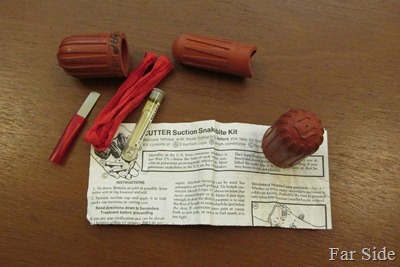 The hard plastic parts were for suction, the little red knife was to cut x’s across the bite marks, also included were an antiseptic and a string.  It is a Cutter Suction Snakebite Kit.

On a side note:  A few weeks ago I was contacted by a writer who was researching deaths by snakebite in Minnesota.  I assured him the there were no snakebite deaths recorded in Hubbard County, at least I have not run across them.  However in the south eastern part of Minnesota there used to be two types of Rattlesnakes, a Timber Rattler and what the early settlers called a Prairie Rattler but was actually a Eastern Massasauga, many children were bitten by the Prairie Rattler because it liked swamps and meadows (hay land where the children would run through barefooted)), it took the better part of a week to die from that bite  and it was very painful. Wheresas if a Timber Rattler bit you, you were most likely a goner in less than a day back in the olden days:)

No clue so will check back later. :)

My guess is something medicinal due to the ointment tubes and pill containers. Will check back.

Duh!!! Have not a clue but would like to know, Francine.

Okay, another one I cannot even imagine! At least I know it's not a record cleaner. :-)

It is an old snake bite kit, made by Cutter if I remember correctly. There is a blade inside that you used to cut an "x" in the fang marks, and then you could use the rubber case as suction cups to suck the venom out. Didn't work very well, though.

I had one of those and KCD is correct... at least that's what I think it is. Mine was green.

I wouldn't have known, but now I do. Maybe there is a bottle of snake oil in the background:)

Bravo to your smart readers....I've never seen a "snake bite kit" if indeed that's what it is. I have rarely seen a snake and I like it that way.

http://www.vtarmynavy.com/snake-bite-kit.htm has a photo and description. I would have never guessed!

I've never seen a kit. My kin just always carried a sharp knife. Uncle Crit dried Snake Root every year and swore it worked. If you were bitten you take a chaw of snake root.

People donate all kinds of items to a museum:)

I have no idea , never seen one before ! Don't think they have ever had them here in Canada ! Great post . Thanks for sharing ! Have a good day !

I'm with Harriet. The less snakes I see, the better...although the ones around here are much nicer than the ones up in the hills...

That reminds me: I missed your last mystery's second post. I'll have to scroll back and see what the result was...and remember to come back later today!

Now that is a very precise piece of a first aid kit. No wonder snake bites were so feared if they were so fatal.

We could have a yard full of snake root and I wouldn't know it. Still, I love when someone knows the answer. :)

Very interesting.... I am very happy we don't have those big snakes here :)

I didn't have any idea what it was. I'm glad we don't have any rattlers here. I don't even like to see a garter snake.

Used to live in Caledonia, MN in the '80s, and we would take a drive down along the Mississippi River and sometimes see rattlers sunning themselves on the road. I also recognized the snakebite kit from Girl Scouts. I'm n joint these little mysteries!

I didn't know we even had poisonous snakes in Minnesota! Good to know. What a kit--but it might have helped somebody survive, I guess.