During our evening drive, one square mile, just before sunset, we have observed different deer behavior.  Some groups seem to be always together, their herd is established and their numbers do not change.  This years fawns are wary but curious, the late fawns still have their spots.
Sunday night we observed two bucks fighting it out.  It was strange a herd of about eight deer were in the bean field, and at the edge of the field two bucks were left in the dust when the others ran toward the woods.  Apparently the hormones were in control. 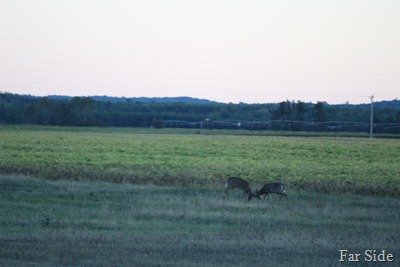 Their heads were down and they were shoving each other around and around, only concentrating on being a winner. 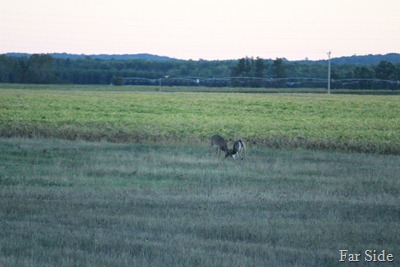 Most of my photos were blurry…they were moving around really fast.  Finally they separated only to go back at it again. 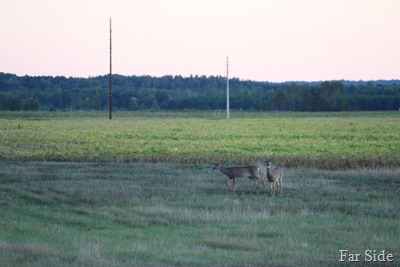 A couple of nice bucks…we decided they would make good jerky come November.  I personally will leave the gun hunting to others and continue to hunt with my camera.

It was fun to see these two in rut.  From what I have read they can start to be in rut from late September to November, they fight for dominance of the herd of females. A buck only has one thing on his mind during that time…does.  They certainly didn’t mind us watching the fight.  It must have been a draw, they both took off together for the safety of the woods. They had to cross the road in front of us. 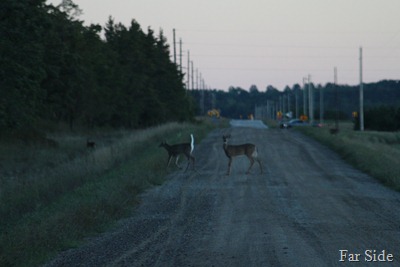 If you look closely there are four deer in this photo. Yes, they are headed for our place, right now the safety of the woods, the lure of the bean field and water down at the lake will keep them around for a while:(
Posted by Far Side of Fifty at 5:03 AM

Interesting. We have tons of well corn fed deer around here but I've never seen this....:)

Morning, wow!!! already feeling the rut....so neat you captured them with the camera. Great pictures, love deer, glad you shoot with a camera, Francine.

ow neat that you were able to capture it on you camera. So glad your "weapon of choice" is a camera.

I like the way they leave together, like two mortal enemies of the playground who leave arm in arm.

I never thought about it, but of course they would go into rut, just like their larger cousins do. Although the pictures are not too clear, they give me a good idea of what happened. I've learned something today, too! :-)

Deer go "crazy" when they are in a rut... just like humans.

Talk about being in the right place at the right time. Good photos of their duel!!

You'll know where to find them, then, when you're ready to make that jerky!

I remember seeing my dad's hereford bull and the neighbors angus bull tearing out a whole row of fence fighting it out for territory. The bucks fright is a rare sight for most of us as it probably is in the timber where they do their battles.

Rut can be dangerous for anyone that gets in the way. I knew a gal who was walking her dog and almost got "rutted"....they're crazy this time of year. Stay in your car! LOL!

...but when hunting starts they can find a very private place. You are very fortunate to see the fight and photograph it.

I used to do alot of hunting with my dad but now only hunt with my camera as well. Those I do enjoy game meat and fish my friends give me!

I doubt they are in rut, I suspect these are young bucks learning the aspects of dueling. Rut shouldn't start for another month.

We have seen some beautiful bucks... (beautiful when they are in someone else's pasture or yard)... but we have never seen them 'duke it out'.
Neat picture!

For some reason we haven't had many deer this year...we usually have a herd of about 8, but we have only seen one doe. Strange.

Your photos are good, Connie!

One thing on their minds--true. Makes the roads more dangerous, too. Great pictures considering they were fast moving and rutty. ;)