One hundred and two years ago my maternal Grandmother was born on September 26, 1911.  The daughter of a farmer and his wife.  For eighteen months she would feel safe and loved, then her mother would die. 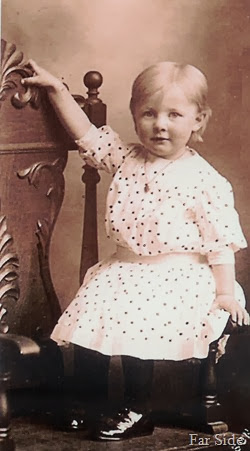 This photo was taken when she was two or three.  By that time she was living with her father’s sister, a lady they called Grandma Anderson.  Menfolk couldn’t be bothered with a girl.  Later her father would order up a mail order bride to really mess the family up.

Depending on your birth order, you remember different things.  Take for instance my baby brother and I.  I remember Grandma teaching me how to gut a chicken and clean the heart, liver and gizzard very carefully.  My brother remembers her grabbing a chicken and wringing it’s neck.  ( I think he said at the time he told me about that memory  “ Not exactly warm and fuzzy feelings about the little old lady that is your Grandma.”)

I have no doubt that his memory is as good as mine is…both things happened...at different times seen by different children.

When I think of Grandma, I think kitchen and cooking and lemon bars, Russian Dill pickles, apples and raisins in the dressing at Thanksgiving, and fresh peas and potatoes in white sauce in the summer.  My brother and the rest of my siblings probably don’t remember all those good foods…or perhaps they had their own favorites. 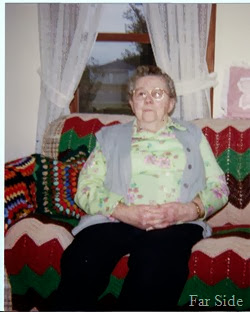 Grandma in 1990, she would live another five years until 1995.  I am pretty sure she was at Aunt Leila's in this photo ( Grandpa’s sister). Land sakes alive someone had crochet/knit up a storm!

Somewhere along the line, I think my Mother took a photo of the town named after Grandma. It was either my Mother or my brother…I think this is Elsie, Oregon. 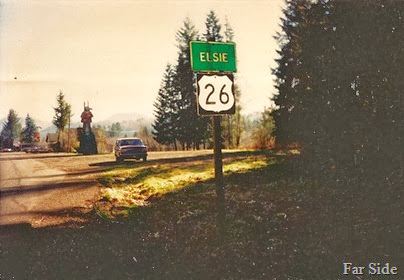 Grandma would die before the name Elsie became popular again.  She has a Great Great Granddaughter named Elsie now.  I think that would have pleased her:)

Oh yes, she would be so thrilled to have a namesake. I hope her great great granddaughter will cherish the history/photos you provide here. That is a lot of afghans!!!!!
Hope you are feeling better.

What a lovely tribute to your Grandma Elsie. You're right - we don't use that name much anymore, and I like it.

The first thing I noticed was all of the different afghans on the sofa! Used both to cover it and keep it clean, of course, and to snuggle down to take a short nap in the afternoon with. (likely not, though, if my memories of my own Grandma are similar to yours.)

It is funny how different things were back then. Also it amazes me how different our perceptions are of the same person or event and how we remember someone. Happy Birthday to your late Grandma Elsie.

Your first three sentences are the beginning of a novel! And a town named after her, too. You have a story waiting to be written.

I've heard stories of my mom's grandmother, on the plains of Oklahoma, getting a chicken running around the yard and then um.. preparing it to be deep fried. She made her own soap too.. in a big pot out in the back yard.

Tough women... that also made afghans and such under the roof a place called "home."

I have a friend, younger than me, who probably couldn't make an afghan, but is very familiar with killing chickens.
You aren't laying eggs any more.... off with your head, plucked, gutted and into the freezer or the pot you go.
Tough women alright. Very cute picture of your grandmother as a child.

Morning, my mother's name is Elsie, ahhhhh......What a sweet picture, precious........oh the beheading of chickens, still see that in my mind at the farm when I was small...YIKES!!!!!, Blessings Francine.

Fantastic memories. Isn't it funny how we remember different things than others?

I like the name Elsie. How wonderful to have such memories of your Grandmother. Both of mine passed before I was three.

I noticed the afghans right away in this photo. I don't think anybody makes afghans anymore.

Lovely memories. I had an older aunt named Elsie when I was a child.

Wonderful photos and post ! I had an Aunt Elsie it was a popular name in England way back to ! Thanks for sharing . Have a good day !

What a wonderful story. I love that picture of her at 2 years of age, such a great photo!

I like this post very much. It makes me think back to my own grandmothers, and remember some of those same kinds of memories.

What a precious picture of your grandma in her early years--probably years of turmoil in such contrast to the sweet pose she struck. It is interesting to see how differently even family members can remember a relative.

When I look at the picture of the young child, it's hard to reconcile it with that old woman at the end. But that's what happens to us in life, isn't it? We grow up, out, and finally, old. :-)

That is a warm and wonderful photograph of Elsie as a young child. Our generation are so lucky in that we are able to preserve all those earlier generations and our photographs and memories of them via the Web.

Loved visiting the farms in the family, but was glad they were dairy farmers...with lots of barn cats. Never ate meat when I was visiting a farm--LOL! Great picture of your grandma! :)

I love memories of my grandparents...I also enjoy all the cooking and eating that I did with them!