Chance’s inner alarm needs to be reset.  He had to go out at 6:30 AM.  It was raining.  It rained on and off all day, the high was about 55 degrees.  Several people we talked to said “At least it isn’t the white stuff.”   We may have had one very light frost, but have escaped a hard freeze. 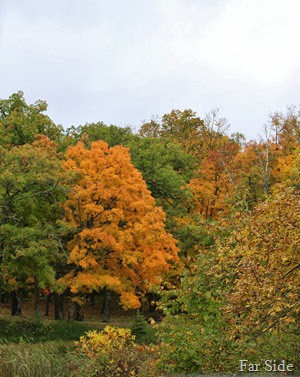 Some of the trees have colored to a golden light orange, even in the rain they were striking. 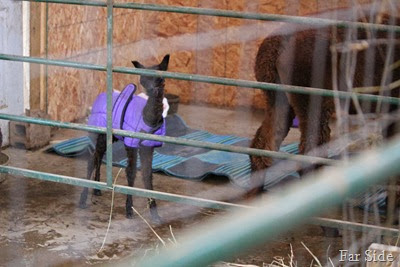 Have you ever been to an Alpaca farm?  Me neither. This little guy in the purple coat was just four hours old.  We had a wonderful tour of an Alpaca Farm by a fellow named Scott. 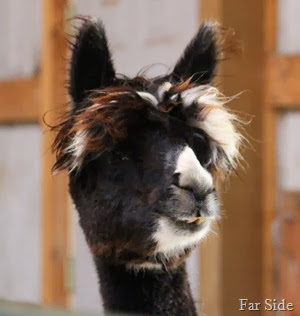 This weekend was National Alpaca Farm Tour Days.   I bet I could raise Alpacas if I had a barn and if I were younger, and had hay land and two guard dogs.  I am super impressed with their fleece and their personalities.  They all poop in a communal spot..easy keepers for sure…one area to clean up instead of the whole barn and barn yard. 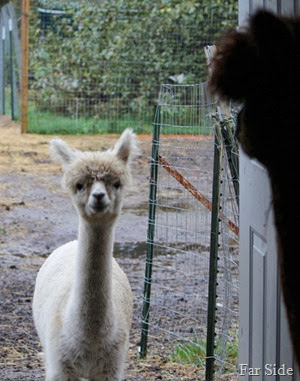 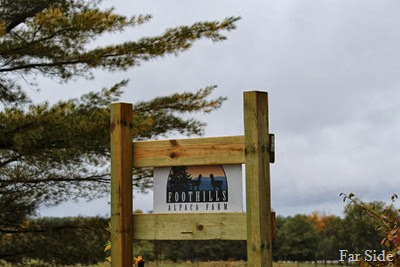 If you are ever in the Backus area you might want to check out their farm.  After the farm tour we headed over to the Chain Saw Carving Event in Hackensack… more about that some other day.   It was a fun day..we came home and had a nap:)

You had a much better day yesterday than I despite the rain.

What a wonderful way to spend a day out.

I never knew that Alpaca's pooped in one pile. How very cool! I learn so much from my blog friends. This will be an impressive bit of trivia to keep in my mind ;-)

There is an alpaca farm near where we live, such gentle beautiful animals. They just walked up to us with no fear.

Such a cutie, and so new, what a treat that was.

What a sweet face! I think they are adorable. I'm glad you had another nap, now that you can do that any time you want! :-)

Definitely sounds like a good day out. I do miss the fall colors of the North. Thanks for sharing your day with us.

Alpacas have the longest eyelashes. I love to knit with alpaca yarn, especially baby alpaca.

Chain saw carving in HACKensack? Now that is real fodder for one-liners ;)

They are really sweet animals. So cute.

We have yet to have our first frost as well. Not even a light one. And boy howdy have we had the rain, and wind all a bit early for that, even for us. Alpacas are darling aren't they.

They are a wonderful creature to see. I am glad that we have a few farms around with them.

I've always been fascinated by alpacas. I like them even more now that I know they all poop in the same place. Be waiting for chain saw pics. ;)

What cute little guy. I think I would like to have an Alpaca to raise.