I have two photos of me with my paternal grandparents.  This is one of them. 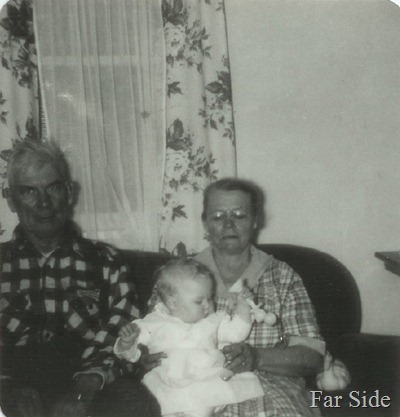 My Grandparents don’t look thrilled.  I am told that my Grandmother called me Connie Boy instead of Connie Joy.  My Grandmother died in 1953 of a massive heart attack. She was 64 years old.  Fourteen kids and being a farmers wife took it’s toll on her body.  I have  no real memories of her..just vague feelings that I associate with her..butter..that I hear she used to feed me from a spoon.

My Grandfather lived a good long life..he died  just short of his 88th birthday in 1978.  I have many memories of my grandfather..pink peppermints, long underwear all year round, white shirts on Sunday and the smell of moth balls that permeated his wool clothing.  Then he remarried…I cannot remember exactly when he married Grandma Annie..sometime in the early 1960’s..and he outlived her too. She died in 1968. 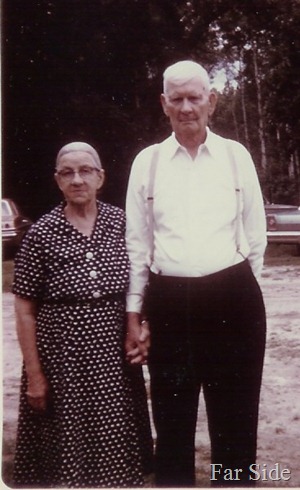 He visited many widow ladies in his quest for companionship. Not sure why he chose Annie other that she was a very kind lady and she spoke Finn. She had her own house..after her death he was told to move out.  So he built a small two room house at Uncle Hugo’s place on Shell Lake.  One Saturday at his lake place he was having a hard time hearing, I asked him why?  Turns out he was saving his hearing aid batteries for church on Sunday morning.  He was a kind man whom I enjoyed visiting with.

My Grandfather was old school..no dancing, no lipstick and no alcohol was allowed.  Spitting however was permissible. I think he chewed tobacco his entire life.  He thought that women should only go to school to be teachers..and if they were married ..well they should stay home have babies and take care of their husbands:)

Sounds like he wasn't a heck of a lot of fun to be around. And still he got married twice. It's amazing!

Both of his wives don't seem very happy, in the pictures anyway. I like the fact that he's holding hands with her in the last one. You do have long lived relatives in your family! I don't think anybody on either side made it to their late eighties.

You were a cute baby.

Interesting comment on the visiting many ladies..makes me wonder if he was checking out their cooking or maybe their bedroom skills. Now widowers just go with the first woman who knocks on their door. Not good

I love old pictures and stories! I think grandpa sounded like a bit of a rascal. :-)

Your grandfather clearly had a strong faith and love of the Lord to struggle with his hearing six days a week just so he could use his hearing aids on Sundays. That kernel of information tells me he was a good man.

What wonderful memories you have of him, it's great that he lives on in your memories...

He kind of reminds me of my Grandfather, the way he holds himself in the photos.

The fact that he's holding hands with his second wife just seems out of character, but kind of sweet:)

Aren't you cute in that photo with your grandparents. It's great you have those memories of your grandfather. Saving batteries for church, I think he was something special.

I never really got to know my grandparents as they lived in England . You have some wonderful memories and photos here ! Have a good day !

Love the old pictures. Your grandfather would feel right at home with one of our political parties this year.

Wow...butter from a spoon. Now, that's a habit we're better off not falling in love with!

These old guys lived a simple hard life. The views they had were normal for the times. The picture does speak volumes. Neither one of them look very cheerful.

Very "old school"--from the "keep 'em barefoot and pregnant" generations. My folks came from that generation but my mom broke out and wanted a job so she'd have her own money. They fought a lot for many years--LOL! But that generation didn't believe in divorce, so they're still together.

I love your old photos. It's hard to tell if either of the wives were happy because they were also taught to do that staring thing for the camera--LOL! Since he was holding the second wife's hand, makes me think that picture must have been taken in the time of either courtin' and newly wedded. ;)

What a cutie! 'Love those big round cheeks!!!

I have pictures of my grandparents and they just don't look happy in 'em either. It must of been the times. Maybe goin' through the depression shows on their faces.

My mother once told me she asked her Grandmother why dancin' was wrong. My Great-grandmother Moon's answer was. " 'Twernt the dancin' that's the sin, it's what goes on behind the barn!" Heeehehehehe!

God bless ya sweetie and have a fabulous evenin'! :o)

I wonder how many men would like to return to the attitude of those days? Fat chance!!!

Sweet pictures and memories. Butter from a spoon.....the story in our family is that grandpa fed my brother turnip greens when he was a baby!

School teachers, secretaries or a nurse that is it for the professional world. It was a strange time that they grew up in. My grandma remarried and took care of husband for two years with a stroke. When he was dead, she was evicted also. Interesting to hear you grandfather's story.

certainly you are blessed having these memories

I believe my Mama had those exact same curtains. Your grandfather sounds typical of his generation. Love stories like this