I always thought that guys who enlisted in the Navy would be excellent swimmers. 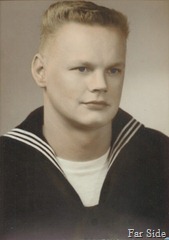 My cousin Chuck.  He was in the Navy.  He is a woodcarver.  During carving this week he talked about his Navy swimming experience.   Turns out he was not a swimmer when he enlisted. In fact he had a great fear of the water.  During the initial Navy Swimming Test he jumped off the deep end of the pool and promptly sunk like a rock.  He said they fished you out with a bamboo pole.  Every day after boot camp he went to swimming class.  He learned to swim. He learned to set aside his fear of drowning.

Early one spring when he was about six years old he was riding on top of a load of loose hay.  His father( Uncle Jalmer) was driving the team of horses.  His brother Gerald and a neighbor were riding at the back of the load.  The water was up from the spring rains and winter snowmelt.  Chuck was at the center of the load.  The wagon wheel hit a hole and the whole load of hay was dumped upside down in the creek.  Gerald and the neighbor were thrown clear.   Chuck was in the icy water with the load of hay on top of him.  Uncle Jalmer dug him out.  This was in about 1946… 66 years ago..Chuck says he can remember it as if it happened yesterday.

I found an old photo taken right about that same time. 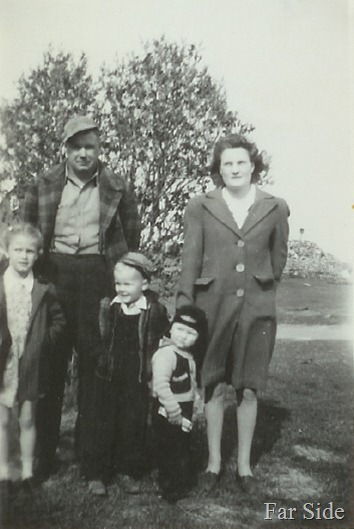 Chuck says that the last time he went swimming intentionally was years ago.  Although one year while collecting nets in a boat up on one of our Minnesota lakes he and Roger W. took on too heavy of a load of wet nets and sunk.  They overturned the boat and crawled part way on top of it and paddled to shore.  He said that Roger was laughing so hard he had a hard time paddling. Chuck was not amused at the time..although he did smile whilst recalling the story:)

I'm glad Chuck made it through the overturned hay ride accident. That could easily have been disasterous.

Interesting how many old-time sailors (when they had sails) didn't know how to swim and many of them drowned if their ship was sunk in battle (or by nature).

What a terrifying experience Chuck had when he was little. Thankfully his uncle was quick thinking.

Lovely photos. Glad Chuck is hear to tell the stories. Its strange to think that back the sailors could swim ya think that would be the first thing they would ask them all wouldn't you ? By the amount that has happened in or near water I think Chuck should stay away from it lol ! Have a good day !

Glad Chuck finally learned to swim, since it seems he doesn't get along well with water. Good Watery Wednesday post! :-)

Uncle Chuck has a lot of stories to share. He finally learned to swim but the first accident had to be pretty scary.

Wow, Chuck had some close calls! Back then, people didn't have the same opportunity to learn to swim that they do now. My dad was in the Navy, and when I knew him he could swim, but I'm not sure he would have known how to swim when he was in the Navy.

Very interesting story! You make your characters come alive for us!
Peace,
Muff

I thought the same thing about guys in the Navy...but my Hubs was not a great swimmer when he first joined the Navy either...he had to learn

I can imagine that he would never forget that experience. I enjoyed the photo and story.

My mom was always afraid of drowning. She learned to swim as an adult. Her step-brother could not swim. When he joined the Navy, he jumped or they threw him in the water. He almost drowned. They tried to teach him to swim but he never did learn.

I often have wondered why so many guys from the upper midwest joined the navy. Many didn't know how to swim...:)

Makes me wonder if I my dad knew how to swim when he joined the navy--lol!
He was a lucky man! What a scary experience!!
Crank up the heat--the first snowflakes may be arriving soon! ;)

Interesting how you pick one person and feature a highlight or two of their life and make a great post.
I always enjoy the old pictures because they remind me of when I was at that age.

I love how your great story telling and old photos keeps drawing us all in :-).