A long time ago back about 1978 or 1979 our daughters Trica and Jennifer had birds. Parakeets or Budgies. The girls chose names for their birds.  Pansy was green with a yellow head she belonged to Trica.    ABC-123 was Jennifers..he was blue with a white head.

One Sunday afternoon the girls asked to have their birds out..sure.. Jennifer wanted to hold ABC-I23 with her blankie because the bird had sharp claws.  A short time later there was a problem with ABC-123  he looked strangely asleep and stiff..poor ABC-123 was dead..he must have had a heart attack.

Poor Jennifer..she was only 3 or 4 years old.  It was very traumatic for her.

Last weekend one of the places I wanted to visit was Hawk Ridge in Duluth.  Sunday morning just before leaving town we headed up there.  There is a beautiful view of the city from the ridge. 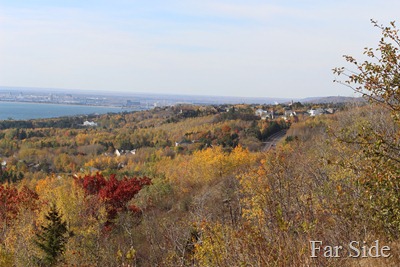 Hawk Ridge is right on the path that the birds follow on their migration south.  If the wind is right the birds fly right by the ridge. 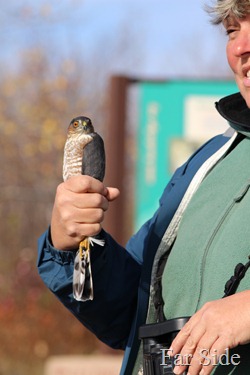 Volunteers are on hand with binoculars and very available to answer questions.  Volunteer Margie brought out this Sharp-shinned Hawk.  They have several banding stations in the immediate area..where birds are lured in and caught, banded, weighed and sexed.  They bring birds up to the Hawk Ridge so that people can see them up close..and as a fundraiser they can be adopted.  This Sharp-shinned Hawk could be adopted and then released by the adoptee for a donation of $25.

Jen spoke up immediately.. “I will do it!”

Visions of ABC-123 and a little girl with tears in her eyes flashed quickly through my head…she is older now..certainly this bird won’t die. 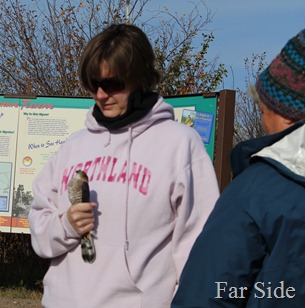 The volunteer showed her how to hold the bird and it’s number was recorded.  They will send Jen a note if the bird goes through the banding station again. 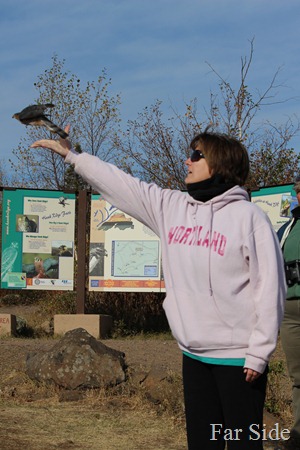 And her Mother the photographer extraordinaire got the shot!  I did it..I really really did it!  The bird swooped down and quickly did an upward loop and was on it’s way south!

Jen was pleased..it was quite an experience for her..redemption is sweet! :)

Great shot, Connie! And a wonderful thing to do, "adopt" and release wild birds.

That is such a cool story and the pictures are great.

A very nice story. The pictures are great.

Great timing on that precious shot. You could have easily missed it, with no do-overs. Wonderful story, thanks for sharing.

I'll bet you were nervous about that shot, but you did it! How fun is that, letting the hawk fly free. Tiny little thing, isn't it?
A few years ago, a few miles away, we saw a very large hawk sitting at the edge of someone's lawn by a ditch. Long story short, there was something wrong with it. We were able to catch it with the help of a blanket and thick gloves which we had on us, and we put it into a borrowed dog crate from the animal shelter just up the road. They had contacted the appropriate rescue organization, and we were told we could keep track of the hawk on their website and be there if and when it was released. Never did, but wished after that we had.

Great capture, and what a wonderful feeling for her to be able to do that....

What a great sense of accomplishment. And well done Mum for getting that last shot - lovely!

Great shot indeed ! My mum had a few Budgies as I was growing up ! We have a place here called Hawk Cliff at the north shores of lake Erie that does the same thing .
http://www.ezlink.ca/~thebrowns/HawkCliff/ A few weeks ago Papa and I went there to take photos it was awesome !
Have a good day !

What a sweet story--and you caught the moment perfectly. Glad Jen still has her love of birds. Guess she wasn't too traumatized over her early loss.

Been thinking about Far Guy today. Hope he is doing better.

Congrats on getting the shot! I've been wanting to go to Hawk Ridge.... I think we'll do it next fall for sure.

Great story how you tell about the disaster of ABC-123 and now the success story of the sharp shinned hawk. Yes, a super shot as the bird leaves her hand!

I thought you were going to sat...and the bird dropped dead on the ground. That would have really made for a traumatic experience for eceryobe involved. I'm glad the story didn't end that way. Hurray for the happy endings and for you catching the exact moment on camera.

What an incredible and unique opportunity. Great shot, Connie!

We have never been up to that ridge even though we have read the signs on how to get there. It does look like a great place to look out over Duluth. It is neat she got to release the bird.

Birds can only breathe if their whole ribcage moves in and out so if they are held too tightly or wrapped tightly they will suffocate even if their head is not covered...it's all in the chest. Which is why when she held more by the feet like they taught her to hold the hawk so its chest was free...well, then the bird was fine. What a great shot of the release (redemption!). :)

That is a beautiful picture - - not only of the action but of Jen! I like that story and now it is recorded for her grandchildren!

Our neighborhood sharpie is a bird killing machine
I've found feathers around the back yard that I know the cat didn't cause because she was in the house.

I need to move the feeder farther away from the windows. Already had one bird killed hitting the glass door attempting to flee that accipitor

What a sweet story and a great picture!