One of the things I wanted to learn to photograph was waterfalls. I wanted to shoot some soft flowing water.  A tripod is a must..or finding a stable place to set your camera.

I had a tripod at home..and I forgot it there..unfortunately..so I bought a new one..but it was missing parts. Between the instructor and Jen they cobbled together a workable tripod for me for the first morning.  When we returned to Duluth I bought a new and improved tripod.

I set my camera on the rock wall to take the Gooseberry Falls photos..I was pleased with them. 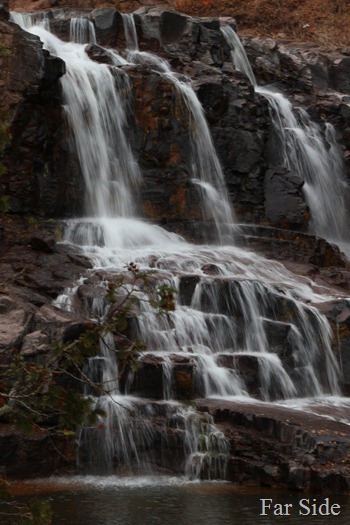 There was a happening at Gooseberry. 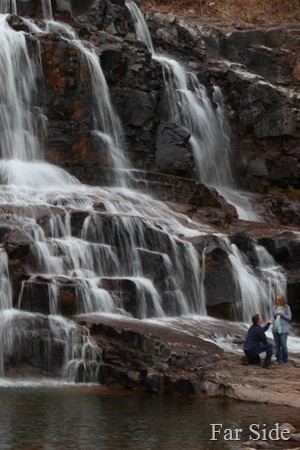 I just stayed at the lower falls..the girls went up to the upper falls.  I visited with some very nice people and rested on the benches along the walkway and watched people and their dogs.

This is my best night shot of the city of Duluth. 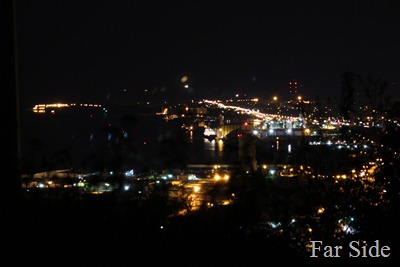 I have to make myself a “cheat sheet”  that has my settings on it.  I like to do night photography at Christmas Time..perhaps I can get some really nice photos.  I used my new tripod for this shot.

Jen wanted to go up to the Enger Tower for a look at the city.  Enger Tower is an eighty foot observation tower made from blue  stone.  It is beautiful at night. I was standing under a tree and got the leaves in this shot! 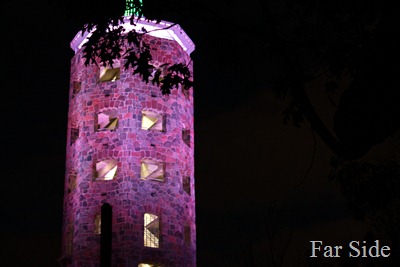 My main photography goals were met during the photography workshop.  It is all about experimentation..and getting comfortable with your camera.  I have a long ways to go..but at least I am on my way:)

Far Guy is still sick..I spoke with his Doctor who prescribed another medication for him yesterday.  He is struggling to recover from this illness whatever he has..earache that feels like he has an ice pick in his ear/body aches/temperature/cough and stuffy head.  He spent only about three hours upright yesterday..I kept bugging him to drink more fluids and take deep breaths.  I cooked him some chicken for supper.  So far knock on wood I am free of symptoms…perhaps this is the same thing I had back in May…maybe I am immune. This is the sickest I have seen Far Guy in a very long time..if he gets any worse I will have to take him to the hospital.  This is day twelve..he rallied for the weekend and we thought he was on the road to recovery..but I guess not:(

I admire your willingness to take on a new or upgraded "hobby." I wish I'd paid more attention to photography years ago before I took up blogging and birding. Oh well. My little point and shoot will have to do. :)

Beautiful shots of the waterfalls. I love coming in to Duluth at night. The city has its own light show. Prayers out for Far Guy, that he recovers soon!!

I hope she said YES. The waterfall pictures are lovely. I got a bad cold at the same time Far Guy did, and I am not over it completely, still blowing and coughing. I'm glad I'm not as sick as he is, though. I think it's been long enough he needs to go to the doctor. My ears were involved, too. I know that ice pick feeling.

Those are some very nice pictures of the waterfalls - very professional looking. Sure hope Far Guy is feeling better soon. I will say a prayer for him.

Your photographs are wonderful and I do think that you have a talent for night photography. The first one of the waterfalls is terrific.

I hope your husband gets over whatever ails him quickly. Is he on antibiotics already?

Your pictures are wonderful - so glad you had a great learning session! Well wishes to Far Guy...

Yes he has been on antibiotics since last Friday. A different antibiotic was added yesterday. Thanks for reading:)

Hi DJan, He saw his Doctor on Friday. With the medication he started taking then, the Doctor said he should be better by Monday or call the office. So I did and he prescribed a different antibiotic. Hope you get over your coughing and blowing soon:)

Oh dear, I sure hope Far Guy feels right as rain and very soon! I'm so glad that you had such a wonderful trip and learned so much, how fun is that!?

Great photos. That is one romantic young man, isn't it? Glad you had such a productive trip. Prayers ascend for poor Far Guy.

Oh my, I hope Far Guy is on the road to recovery quickly.
Great waterfall shots! Yes, a well placed rock or wall, or rock wall, fills in not too badly when you don't have your tripod in your back pocket:)

Did it look like the young woman said yes?:) I'm sure that couple would have loved a copy of your proposal photo. How many couples are lucky enough to have that moment captured for posterity?

It is a tough virus. Our form of it down here is very similar. Some people get it and are over it in three days. Others have hung on for a couple of weeks. I remember walking around with bad balance, an inner ear thing, and thinking I must have serious disease. It affected me in ways a cold normally never did. It did finally go away. Some people had their hearing shut down for days before it started to subside. Drink hot everything, cider, tea, lemon water, anything that can internally steam the sinuses.
Your photos are wonderful. You will get so that you don't need the cheat sheet but you are lucky to have someone to explain it to you. My work is still all accidental shooting. I knew that was Gooseberry as soon as I saw it. We always stopped there before heading up to Grand Marias.

Oh, and now I see in the comments above that he has another med...heal quickly.

Your shots are so wonderful, and it's so rewarding to be able to get the shot that you want, when you want.

They had their own photographer there..I am certain he got many good shots:)

Exquisite photography! i love all the shots you took!
Sorry that Far Guy caught that bug. I doubt if it's a virus if the dr put him on antibiotics. So maybe it's the flu? Has his TN been affected from it? Poor guy -- there's nothing worse than a sick man!
Peace,
Muff

I love your photos; you are going to have so much fun with the new equipment.

I'm very sorry to hear about FG. Praying that he improves very soon. Keep us posted.

Oh, my goodness! I 'm praying for you and for Far Guy to get will soon! Real soon! Like by the time you read this he is up and about feeling ever so much better!

Okay, totally jealous you got to do the photo workshop but my oh MY you have some AMAZING pictures there! Love love love them and I too think I need to be tracking my settings for the shots I want to take....just can't remember them anymore!

Your photographs are beautiful. I hope Far Guy is feeling better. The disease sounds horrible.

Beautiful photos - I need to dig out my tripod and do some experiments. Hope Far Guy is well on the mend with the new antibiotics - he must have been feeling really miserable. Earache's horrible, I've just had a dose of vertigo due to earache and if you're dizzy when upright, it really knocks your confidence. Sending positive wishes. Jo

Great job on the photos! I agree with your idea of keeping a cheat sheet for your settings; that way you at least have a place to start next time. I sure hope Far Guy is feeling better soon. Do they ever prescribe ear drops for grownups?

Your shots are great! I sure hope Fall Guy gets to feeling better! So, how do you take night shots and have them come out?

Twelve days is way too long to be absolutely miserable. I hope Far Guy gets some relief soon. Will be praying for him...

Lovely photos. Sorry you had such tripod problems, but you ended up with some beautiful photos.

So very sorry that FarGuy is not getting better. I hope the new meds will kick this thing. It is so miserable being sick like that. :(

Experimentation is what you have to do.
I hope Far Guy gets better very soon.

Poor Far Guy. I'm suffering badly from a cold too. Hope he gets well soon.

Your photographs are great! Would love to take a class like that. Wishing Far Guy better health!!!