More than half of October is gone.  We finished with the leaves. I ran the lawnmower around in a cloud of dust for an afternoon chopping up leaves that I was too tired to rake.  I was just black..and had to take half my clothes off outside before coming into the house headed for the tub. 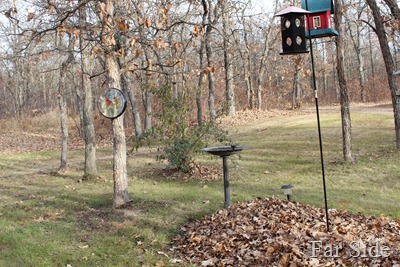 I usually leave a pile of leaves on top of the Daylilies under the bird feeders every year.  I should trim that Forsythia ..it never blooms anyway.  It still has its leaves.

Whilst grocery shopping Far Guy noted that the Flu Shot kiosk was empty..he said “I better hurry over there before they close.  I need that flu shot.”   I talked him out of it twice..once when he first got sick with the crud, and then another time in the Doctor’s Office seeing what they could do for the crud.  He is feeling better..but he is still coughing. He has had two courses of antibiotics.

I got a flu shot too.  My butt is still sore.  The Nurse really didn’t want to give it in the Gluteus Maximus.. I assured her it was a great muscle and would be able to withstand the injection.  She would have preferred my arm..but after that time that I got a flu shot in my arm and couldn’t lift my arm above my head for months…I was unwilling to sacrifice my arm…

I made an interesting Jell-O salad for a funeral luncheon. ( A friend died..damn cancer.)  It was called Minnesota Blueberry Salad or Purple Salad and I found it in one of my cookbooks..a lovely lady by the name of Harriet Enfield who was a really good cook included it in a cookbook. I knew Harriet for years and years.  Four ingredients..easy peasy!

One package of Raspberry Jell-O dissolved in one cup of boiling water.

Add one can of blueberries with the juice

Add one small can of diced pineapple with the juice

Chill until almost set..then add a container of Cool Whip

It was a beautiful blue/purple color.  Far Guy likes Blueberries..and he said it tasted more like blueberries than anything else.  It had the dreaded pineapple in it..so I didn’t taste it..food allergies suck.  Next time I make it..I will add something other than pineapple..raspberries or maybe some coconut and  marshmallows.

I finished one project for the museum and have a good start on the August  October Newsletter.  I made some executive decisions.  Like the when and where for the Christmas Get Together. Just because it has always been one place doesn’t mean we cannot go someplace else within the county.   The little place I called was just thrilled to have a reservation..they can only seat 50 people..we will probably have 25 people attending.

It rained yesterday..our first real nice rain this Fall..I took in my rain gauge for the winter..but we had a puddle! :)