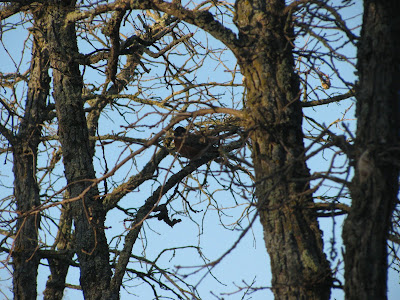 This morning, early, there were finally Robins in the yard..I took this photo through the window!  It is official Spring is here..the Robins declare it so.  I lost by only a couple of days this year.  "She who see Robins first" ..my sister in law with the Eagle Eye saw hers on April 02, 2010.   The next big happening in our yard will be the arrival of the Bluebirds..maybe this week!

Easter dinner went off without a hitch.  It was served at precisely 12:59..just one minute before the time I said it would be ready.  If nothing else..I am punctual.   Daughter Jen forgot her Spatzle maker..so we were without the German noodles..but her homemade potato rolls made up for it.  It was a beautiful day, it was about 60 degrees and the sun was shining so we brought some of the lawn furniture out from its winter hiding spot.  It rained a bit in the early morning..and it rained again last night. 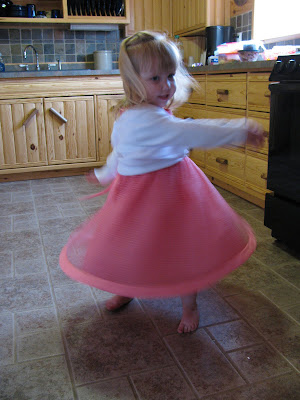 It has been a long time since we had a little girl twirling in our kitchen on Easter afternoon..my brothers granddaughter, Olivia, indulged us..she is an excellent twirler.  She informed us that she might fall down if she twirled too hard, and then she would have to go to the Doctor.

Chance had a blast. He had lots of ball throwers..at one point niece Meg said "Look at that dog,  his whole body is quivering."    He was exhausted.. plopped in the center of the floor..drooling..and quivering in his exhaustion.  After everyone left and the kitchen was restored to normal we all had a nap:)
Posted by Far Side of Fifty at 9:10 AM

You are so lucky to be on time and ahead of schedule, I am one of those that is always late! We have seen the Robins, and the red winged black birds. Yippy!

Sounds like you had a lovely Easter,nothing makes a Holiday like having a large family around. Have a blessed day.

Glad it went so well I would not mine having a little twriler in my kicthen. We have all boys(4) and they don't twril well, they just run.LOL
Patsy

Now that is one fat robin! And what an adorable little twirler you had in your kitchen. Kudos on being such an on time hostess with the mostest! :-)

Glad to hear Easter dinner went well. So glad Chance had a good time too!!!!!!!!

Sounds like it was a wonderful day - especially for Chance. Olivia is a little doll. Such a cutie. Yes Spring is really here and today official grass mowing season begins here.

So that's where the predicted rain went -- your house. We sure could use it in our area but barely got anything. I was looking at the eggs in your header thinking, so that's what you can do with the magic pen... My eggs did not turn out as good looking as your. Sounds like a wonderful Easter!

How could it not be a perfect day with robins and twirling girls? What fun....poor Chance, maybe he slept in. I'm so glad your dinner went off without a hitch!

Have a blessed day, Connie.

I am on time to but no one else in my family is!! Sounds like you had a great Easter!!

I LOVE your kitchen! It's beautiful!!!!! Has Chance ever thought about publishing a book? -- - or at least creating a portfolio - - - He certainly photographs well and has endless poses.

What a great Easter gift...the arrival of the robins of Spring! And your little twirler is quite beautiful! My husband has 2 granddaughters who twirl a bit too. We love it. Glad you had a nice Easter!

What a beautiful twirling princess! Sounds fun but exhausting...

We had snow yesterday, so I guess that means spring is just around the corner... ;-)

I'm still waiting on the Robins...I like your twirling girl ;)

I don't know about you, but after the Grandkids leave Terry and I are always exhausted. But it is fun.

I ate homemade spatzle once. It was sooooooooo good.

Oh rats, on the later Robin siting, better late than never I suppose. But you had a beautiful little bird in your kitchen eh? Glad you had a good Easter celebration with family.