A new addition to our desk came last Friday. I ordered a Laptop with the help of my brother, he researched them for me and suggested three different price points and features. This one is middle of the road, I believe it will serve our needs well. It has Windows 7, which will take some getting used to. 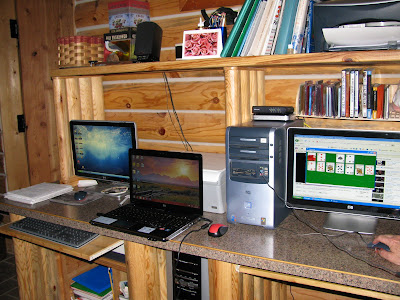 I am really challenged when it comes to the tiny, shiny cursor mover. I tried unsuccessfully for about an hour to click and drag which were the instructions I received to crop a photo. Luckily they make things for people like me, it is called a wireless mouse. Later in the week perhaps daughter Jen can give me a lesson or two, I should learn new things, instead of just becoming frustrated.

We needed a laptop, just in case we do some travelling, and Far Guys computer is giving him the dreaded blue screen every once in awhile. My computer although older than his, has perked up a tad after I dumped a bunch of photos onto the external hard drive.

I tried yesterday to network all the computers to use one printer. Something that should be so simple, as I followed every tutorial there was online, but still could not get Far Guys computer to print from my printer..it recognizes the printer..and things wait in queue..then nothing. My brother tried it when he was here..with no success either...since he is much smarter than I ..I don't feel so stupid. Far Guy just came over and said "It's impossible..you will never get it figured out. " I will eventually..just not yesterday..we must need a driver or have to change some advanced setting..someday I will figure it out. It may be a firewall problem..If and when I get it fixed we can get rid of one printer..which will create more room for one of us. Far Guy can just stack up more books and stuff to dust over on his side.

Far Guy built this log looking computer desk for us, he custom built it to fit the space. It works well for us, since it is centrally located between the living room and the dining area and I cannot see the kitchen or the sink from my spot ..I am happy:)
Posted by Far Side of Fifty at 10:46 AM

Personally, I think you will love having a laptop, but they are slighly dangerous. I love your log desk, I am sitting in my log (and barn board) bed at the moment staring out my big window looking at my big red tulips (and weeds) trying to get my airways ready for a bit of hard work today - today the jungle moves! And that is just the first job today. It is nice to not have to look at work you'd rather not do when your not doing that work, I like being able to sit in the one well tidied spot that is completed instead of seeing the kitchen counter or the unfinished living room, hard to be relaxed or creative with that sort of nonsense starin' back at ya eh? Have a good day!

Howdy girl! I just came in from weedin' and feedin' the yard. It's a jungle out there! I love your desk set up the first time I saw it. ( actually I think I turned a little green and had to repent from covetin' it) Mine is in a big old pine armorie. I don't share well....heeehehehe!

Have a marvelous Monday and fun playin' with your new toy!!!

I love having a laptop. With the wireless network, I can even sit outside (although not in full sun) and be connected to the internet. And for traveling it's awesome for those hotel room, nothing to do times. I even get some writing done on the plane and in the airport.

Laptops are great, I got mine Christmas.
Patsy

Hi Connie, thanks for all the comments on my recent posts! And you did get to hear about the naked skydive after all. I have a laptop AND a desktop computer, both Macs. I was converted by Smart Guy. When we retired we wanted something less likely to get infected, and it's worked well. When I travel I take the laptop, and if I feel like sitting on the front porch in the summertime, I can do that with the wireless setup. Very nice setup you've got there.

The compatibility of the computer and printer may not exist. I have an old laptop that doesn't allow me to print on any of our printers or even use the scanner. I got a single root from the neighbor's son in law of a mulit petaled fernleaf. He had dug it up just yesterday and took it home. He gave me this tiny little root. I will dig this week in Osceola on my mom's again.

You will love your laptop once you get used to it. I hate that mousepad too. I use a wireless mouse all the time. It can be frustrating setting up a network. I set mine up last year. I was determined to do it and I finally got it after a few rounds of cursing and yelling. Since then I have set one up for my neighbor and one for my daughter. I think I should open a business and at least get paid for it.
FYI: After a little research I think I named the purple flower - actually a weed that thrives in fields during cool temps - Henbit. According to what I have read it is not very welcome.

I've not been able to solve the network printer issue either.

On the upside, being forced to learn new things makes you less susceptible to Alzheimer's!

Congrats on the new addition to the desk! I always use a mouse with my laptop...I hate that built in cursor thing!

jealous! I want a lap top.
If my husband wasn't gone to an out of town seminar, I would ask him about your printing problem. We have our three computers and a lap top hooked up to several printers - he might be helpful.

I love, love, love your office set-up! Computers are so much fun. People our age appreciate the technology more than "youngsters". They take it for granted sometimes.

What kind did you buy? We have been looking forever, had the money, and then Gar lost his job. Since he is now working we are back to looking again. I need a really good Graphics card, and a big memory. At least that's what they tell me, LOL. They could probably sell me anything.

Oh, and I HATE those non mouse things. I need a mouse, silly metal pads.

Hi Jen..It is an HP Pavilion dv6-2180 it has a 500GB hard drive..that is supposed to be expandable. My brother works for HP..he usually picks them for me..I said "Lots of photos..and something fast!" :)
Hi Rae, Thanks I will have to look up henbet! :)

Oh how exciting - I think we need one too, now that Steve hogs the computer in the evening>>>>

Sounds like you have a great spot for your computer. Hope you get the printer troubles sorted out.

I'm thinking of getting a laptop but I use a rollerball mouse and I'd HAVE to have a wireless one.....something I've never seen.

When I had the problem with printing to the same printer it was the firewall that was the culprit. Keep fooling with it, you'll get it. That's a really nice set-up you've got there. LOL, 40 years ago if people had told us we'd all have computers and be doing the things we do on them, we would have thought them crazy!!!