This photo was taken in 1982 in Park Rapids, Minnesota.  Someone who will remain nameless thought that her daughters should have bonnets for Easter to match their dresses.  One or two years of bonnets was all they would put up with. 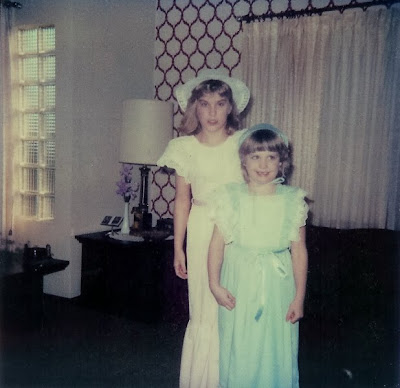 This was taken at Far Guys Parents house..familiar things are there..the red flocked wallpaper on the accent wall..and the infamous red couch..the one that Far Guys Dad picked out because it was red and it was long enough for him to lay down and nap on.  It was also long enough for two little girls to sleep on..one at each end during the winter.  The heat was rarely on upstairs during the winter..when the girls got too big to sleep on the couch and their foot wars drove us all nuts..they moved to the spare bedroom and Far Guy and I moved to the ice box upstairs.

The off white drapes were custom made for the windows.  Off to the left you can see the glass blocks that were present on both sides of the picture window that framed the view of the highway.  Every evening after the dishes were done, Far Guys Mom would draw the drapes and sit in her chair, then she would get out her tooth pick. 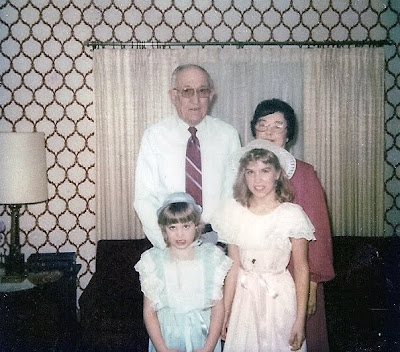 Years later when we drive by the house in the evening..the occupants don't know the rules and you can see right into the living room.  The entire block has changed..a Casey's ( Gas Station and Convenience Store) are the neighbors..where it used to be Taskeys, Larsons and Andrews..the big trees are gone..they were removed when the highway became a four lane..I suppose that Far Guys parents old house will someday be gone too..but I have lots of old photos to remind me of what it used to look like.  I also have this old photo to remind me that the girls were beautiful in their bonnets:)
Posted by Far Side of Fifty at 11:00 AM

Oh the days that we all got the beautiful (heehehe) bonnet to match our new Easter dress and I always got little white gloves to wear to church too. Ya'll have a wonderful Easter weekend.

God bless and have a fabulous Friday!!!

Wow, to remember things like that brings back memories in my own life. I love the bonnets but they sure do look dated! :-)

I remember similar wallpaper at my mother's place in the 70's. At the time it seemed so fashionable. Now it looks like something found in a tacky rundown old motel.
The old neighborhoods here are disappearing too with fast food places taking over. It is sad to see all the changes. Good thing about memories though is that they remain unchanged.

Memories, some make me sad to think all is gone.
Hope you had a Good Friday and will have a Happy Easter.
Patsy

I had that same hairstyle and those glasses in '83! And of course, my girls would have had the bonnets. It would have been in the late fifties, early sixties when I last wore an Easter bonnet. I liked that about Easter. It made it seem even more special.

Those beautiful girls don't look too happy about their bonnets!! They sure are pretty though.
Have a blessed Easter.

It reminds of the Easter Parades at the Osage School - yahooo...... Us girls were all so dressed up and beautiful! --- I remember bonnets but I don't remember wearing them... Cute picture -

Love the pictures and the memories. Happy Easter dear friend.

I guess I don't go by the rules much either. I do try to keep dressed appropriately as I saunter through my dining room at night.

laughing about the toothpick. I remember seeing Pops (husbands grandfather) with one in his mouth. He'd just keep it there hanging in his mouth while he did other things as well.