The Natives are Restless

You know that is is spring when the pager starts going off during all times of the day and night for grass fires.  I am not pointing a finger at any one group, but they seem to be involved more often than not.
Occasionally it is buildings like the old grocery store the other night. 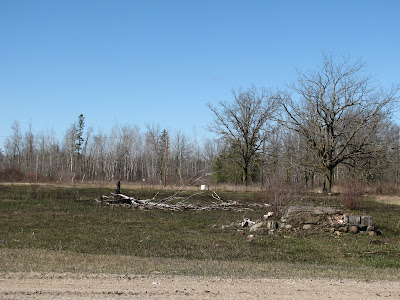 Across the street..at the site of the old bank, the green grass is growing through the black. They burned this grass a few weeks ago. 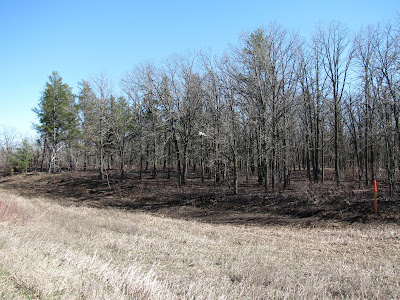 Up on the reservation, black is a predominant color.  Perhaps someone was released from jail, or had served their time.  Sometimes in the spring the BIA comes in and does control burns so that there is nothing left to set on fire.

Evil spirits sometimes invade a house.  Let me tell you, once they are convinced that the spirits are evil there is no way that they will let it stand.  I was at one place three times in one day for a house fire..finally it was allowed to just burn.  They were determined.  Sometimes they are determined with the grass fires too..they drive along the road and throw flaming rolls of toilet paper out the windows.   Sometimes suspects are apprehended..sometimes they go to jail..most of the time they just go about their merry ways.

In 2004 they burned everything that they could on the reservation..and came off the reservation to start fires that would travel in the dry southern winds that plagued us that spring.  That year they started a fire just south of us..it made for a really tense afternoon and evening. I wrote about it, in a blog post called Spring Fires. 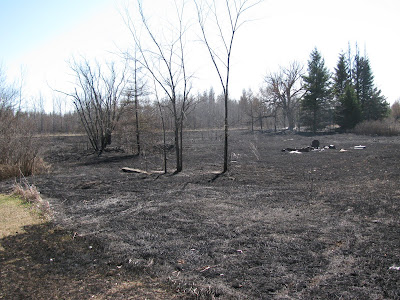 This weekend the weather is supposed to turn warm..with no rain we are really dry..the grass has not greened up yet..everything is brown and dry.  Anyone with pine trees surrounding their house should be extra cautious..fire travels really fast in the pines..fast and hot..we have Oaks here.  This is the time of year that I am really thankful that I live in the safety of the Oaks:)
Posted by Far Side of Fifty at 10:36 AM

Fires are so scary and devastating...

Not pretty sights! Lets hope for no injuries to firemen and homeowners!

Talk about having too much free time on your hands. "I know let's go set some house and brush fires for fun." How SICK. Do they ever think someone could get killed fighting those fires or accidently be in one of the buildings they set fire to ?

I sure wish we would get some rain! We've had a few grass fires in our area too. It worries me when the spring starts out this dry. I'm always thinking about what kind of hay year it's going to be. We haven't had a good one in my area for quite awhile. I hope your fire starters are getting bored with it and find something more constructive to do.

I love fire as much as the next guy but I can't imagine purposely starting a fire to burn others properties and buildings. So much damage and the loss of life can come from this. Most of our grass fires 'round here are caused by the burning of brush on a day that is just too windy. We did go through a bout of someone burning little country churches 'round the area. It's a shame that those 'sparkies' out there just get a slap their singed hands and let go to flick their Bics!

Have a safe and wonderful weekend!!!

I do not understand why anyone would do such a thing. :( Sounds like they need to get a good wallop to their backside and their wallet.

These are malicious fires, right? Ones that are started in the way that some Southerners used to burn crosses on front lawns? Or am I reading too much into your post?

DJan, Yes, they set the fires on purpose..every spring. til the whole reservation is black. Then when it rains and everything turns green..they will try to burn green stuff too..except that doesn't burn real well. Before the DNR and BIA started to help by putting crews in the area, our little fire dept would have up to 12 calls a day in the spring:(

What a bunch of lunatics. How stupid can a person be? I don't understand their logic of destroying things. Sounds like the evil spirits are living inside of them. Maybe they should be burned. Connie, if you get a chance can you drop by my blog and help me identify a weed/flower photo I posted. Thanks

Many people cannot see the potential for disaster in dry conditions. It is a shame.

That is just sick, why would they do that?
Patsy

There is not anything new for me to add to the comments because your readers have said it all again. I agree it is scary thinking about pyromaniacs on the loose.

Wow I guess they are restless.

We live in fear of fires in our forest and it has been so very dry. At our home in the Ozarks, it's pasture burning season and our tiny, volunteer fire department has been busy putting out fires that have spread to homes. So very sad because some have lost everything. Fire is an impressive force to be sure.

That is so sick that someone is doing this on purpose!!

Is it a whole cultural thing or just some that happen to be in a certain culture that are whacked out? Bizarre.

Now, you got me I am all interested in the heat bags. Thanks.

Corn: is cheaper than wheat, and kernels are bigger, and there fore hold the heat more.

Some one says the feed corn has weevil,

Wheat, smaller grains, so you don't feel the knobs and moulds to your neck or knee better.

I use good organic wheat which makes it more expensive but the seller says, the organic wheat doesn't have fumes released when mircowaving.

For 5 kilos, I made 2 snake like bags or known as a neck roll, and 2 little rectangular shaped bags. one kilo cost me NZ$2.

When your corn bag "expires" you may like to try a wheat bag.

I do not like your racist comments about the natives. I enjoyed your Ponsford store history. I used to go there to by Lee jeans for $2.98

Anonymous, Then don't read them:)