Chance: What a week!

Hi, It is I the wonder blogging dog!  She finally lets me talk..and boy do I have some things to tell you!
First of all I got to go see my girls!  The youngest one was eleven this week, the one with the freckles.  This is the week that they are stair steps..one is eleven, one is twelve and one is thirteen.  Next week it changes..anyway the older sisters baked for the youngest..a beautiful chocolate cake..that I was not allowed to taste. In the afternoon they all went to Dairy Queen because the girls are on spring break, I wasn't allowed in there either. 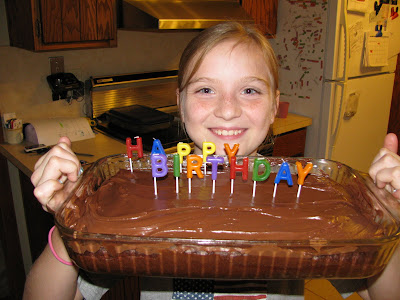 I did get to hear the story about Miss Paige and how she got her name.  My sister wanted to name her Grace, Far Guy suggested Robin ( because he saw his first robin of spring that day).  Savannah wanted to name her Alice..like Alice in Wonderland.  My sister's husband said no way to any of those names...so the tiny baby did not have a name for days..finally he decided he could live with the name Paige. 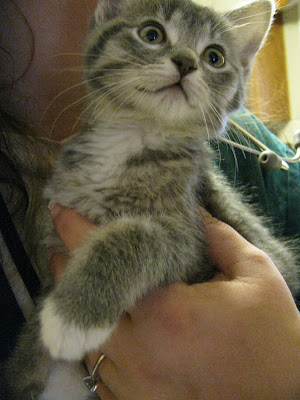 Paige got a new kitten for her birthday..she named it Skittles, (cats must be far easier to name than humans).. ..it spit and hissed at me..even though I was only smelling it.

Then one morning, Far Side got up early..she never gets up early unless something important is happening..and apparently it was.  I had been hearing part of this argument all week, since the Monday morning meeting  "I don't think he needs to go"  "Yes, he does."   "Is it really necessary?"  "Yes, he is going and that is final..quit your whining."  I needed to go to the groomer, Far Side said so.   Far Guy was not real happy.  He supposed he could make it until noon.   I left at 8:30..at 10AM he began to pace.  Far Side said it was pathetic..at 2PM he called the groomer and said "What is wrong with my dog?"   Well nothing was wrong, I was having a great time on my day out playing with the other dogs that were there..in between my bath, my haircut, my toe nail clipping, my ear cleaning, and my anal gland expressing ..yew..I bet that is too much information about those little old glands that dogs have! 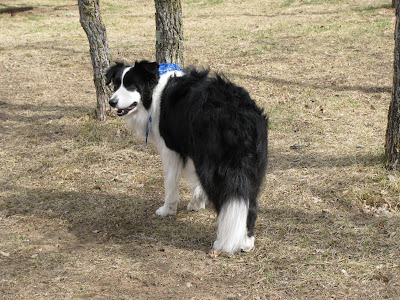 I look pretty handsome.  It took all of five minutes for Far Guy to take off my cute little scarf and tell me I smelled like a french whore..whatever that is..and then he told me to roll around and get dirty. My Groomers report card said " I wasn't an angel, but darn close!  I need to be brushed more often! I had a fun time playing! "  It wasn't so bad, I had to have a couple of really good naps after I got home.  I have never been off leash with that many different kinds of dogs before..little ones, big ones..boys and girls..I am used to small packs..Like Hooch and Odda or Miney and Elvis..but I do play well with others! :)
Posted by Far Side of Fifty at 11:40 AM

Oh Chance you are so nice and clean! Do you think it is time for Odda to go to the Groomer? Or do you think Mom should give Odda a bath. She is worried that Odda may not be good there.?.? But Odda does need a spring bath too!

Two parties in one week - - - one with people and one with canines! My thought is it was easier & quicker for the groomer to give you your spring cleaning rather than your "Fars". We used to clip our doggie because he was scared to go anywhere else. Someone had abused him early in life. Also, he never had the professional look you have acquired! Thanks for sharing your handsome-ness - - - and thanks for getting some computer time so we could visit with you!

Wow, Chance, you are so HANDSOME! Of course, you were before all that, but now... I can understand why Far Guy wanted to get you a bit back to normal before all the ladies came after you! You sure are a smart dog, I knew that anyway. Look who you picked for humans!

Love the pictures!! My cat Fancie couldn't take her eyes off of them!!

Chance, I only have ONE question....how does Far Guy KNOW what a French whore smells like??????
haha

I want to hear that answer too!
Patsy

We hosted a teacher from France one Summer on an exchange program..she sunbathed topless on the docks and hardly ever bathed..she just put more perfume on..she was quite a character:(

A very happy birthday to Miss Paige, she's a real beauty. Chance, I've never seen you look more handsome. Thanks so much on the lesson of French customs, Heeehehehe, cracked me up here.

God bless and have a fun weekend!!!

You look very handsome... and I'm sure you smell lovely.

You sure look handsome! That Far Guy is a crack up :)

Chance, you had a great time this week eh? Your little Paige is a cutie and I bet she loves to fluff your collar and ears.

Your story about the groomer reminded me of the time I took Dirt's Airedale to the groomer for his birthday. He came home and thought I went out and got a new dog and couldn't understand why this new dog liked him so much. We laughed for a long time about that. At least when you come home from the groomer Far Guy recognizes you even if he recognizes that you smell like something else!

Paige is a very pretty girl. Love all those freckles. And Paige is one of my favorite names.

Chance you clean up real good. You are looking extra handsome now. Too bad you had to come home smelling a little like a sissy, but a good roll in something will take care of that.