There are places I remember.  That song has been running through my head since yesterday. I believe it is correctly called "In My Life."  It was a hit for the Beatles.  I remember when the Beatles became popular, my Dad called them "Long Hairs" ..looking back they were pretty radical for the time. By today's standards they were pretty tame and harmless.  You have to recall that most guys wore crew cuts back then..so they were really "long hairs" in comparison.   I believe my Dad also called them girls, because of their long hair. 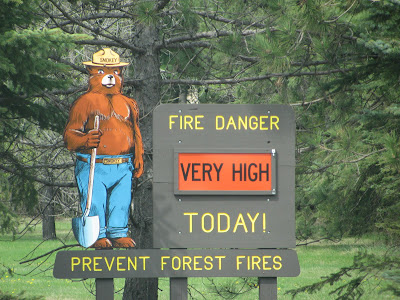 I remember the directions Far Guy used to give kids looking for his house.  "I live right across from the Smokey The Bear sign."  That sign has not been moved in over fifty years. 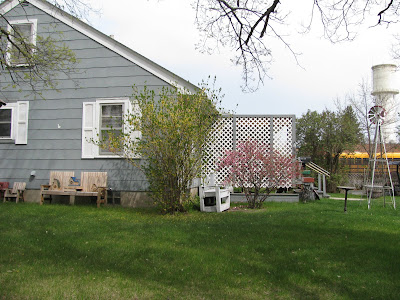 Although the color of the house has changed, it used to be white, Far Guys Mom would never have painted it grey.  The house is still the same.  Some have gone and some remain.  It is the only house on the block that remains.  The rest of the block was sold and a Casey's Gas Station and Convenience Store occupies the old neighbors space.   Someone planted a Forsythia and something pink flowering.    There is a new sidewalk out front, but the alley outback is still the same.  Far Guys Mom would have never allowed all that junk in her yard either. 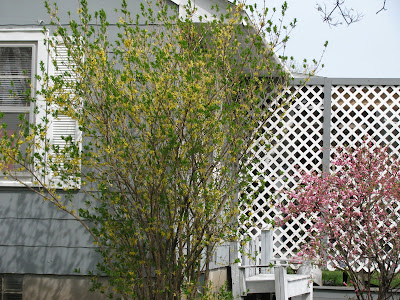 All these places have their moments.  Moments of joy, and moments of sadness.  Moments that you can never go back to, bittersweet moments that you can never reclaim.  The little trees that were planted out front as a shield from the highway noise,  grew skyward every year until they filled up the entire front yard.   Only a memory now removed when the highway was widened.  You can now see the entire front of the house from the road.  Far Guys Mom would have hated that, I am sure that people have turned over in their graves for less things..after all they lived in this little house for forty five years together.  I will never lose affection for people and things that have went before, I'll often stop and think about them.  This is just one place I remember :)
Posted by Far Side of Fifty at 11:09 AM

My parents watched their farm slowly become a junk heap, as the people who lived there just didn't care. The barn is now caved in and the house has not been painted since 1974. They just were not into details.

SMOKEY!!!! What a great old friend.

I ramdomly drive by my parents home. They have both been gone since 2000, I still miss them. Therefore the drive by. Weridly the people who bought thier house still have Mom and Dad's name on the door plate. Maybe it means they are still alive, that I have misplaced them somewhere...I wish.

Nicely put. It is hard to see places that have meant a lot to us change. But it is inevitable.

Love the Smokey
I went by my old house in my old town not to long ago...it is much better than it was when I lived there (o: actually it is the nicest house in the little falling apart town.

I have driven by my Mamaw's place so often. I actually have to drive there to pass it. There are so many memories but the place has changed with new families moving in and out.

"Only you can prevent forest fires!!!" Ya' gotta love that Smokey.

It's sad when homesteads aren't taken care of and the tree thing....it takes a lifetime to grow a great tree. Thanks for sharin' your memories.

You have yourself a terrific day fill with blessings!!!

Your post and "song" bring to mind another one.
"Those were the days, my friend, we thought they'd never end"....

I remember the song Emma Rose posted. Loved the tune of it, too.
I remember going back to the town where my paternal grandparents lived and also the town where I lived when in kindergarten. Those houses seemed so big when I was a child - - but were actually not that large viewing them as an adult.

Awhile back you referred to this home and I thought I knew which one -- I was correct... The widening of the road destroyed many beautiful trees.... I love that ol' Smokey sign -- he's looking pretty good!

Dirt and I, especially I, had to stop going by houses we rented before the farm and my childhood home. I'm too young to roll over in my grave already.

Hi, my husband is from a very northern section of MN so I will enjoy reading your blog. I did a post once on Smokey a while ago! He's great!
Nice to meet you!
Deborah

We were reminising about the past here last night about how some things change and some things never do.

The house and the town is a junk heap now, where I lived. I do have good memories of the place.
Sad
Patsy

I don't think I want to see this house if and when we ever leave. We have made it "ours" and we'd hate to see someone else do the same.

Hey -- I remember I was still very young in elementary school and some kids at school said "Hey the Beatles are coming to America" and I got all panicked. I thought it was a bug that was infesting the country. I was pretty sheltered