This is a photo of Far Guys parents.  Marvin and Evelyn were married in October of 1940, his Dad was 26 and his Mom was 25.  In 1943 when this photo was taken Marvin was working at the Martin Plant in Omaha as part of the war effort.  He was a machinist. 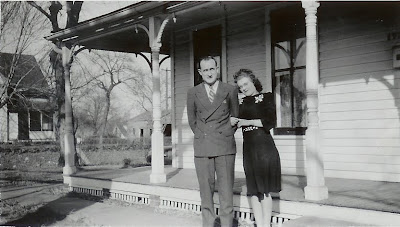 We were never able to find this house in Omaha, Nebraska.  Far Guy tried on several occasions..with no luck. Evelyn used to tell stories of Saturdays nights when they would roll up the rugs on the floor and move the furniture out of the way and dance the night away in the living room.  They lived near a golf course and would go for walks there..collecting wayward golf balls.  They talked of their time in Omaha as an adventure.  They both said "Times were hard back then, you had to make your own fun." :)
Posted by Far Side of Fifty at 11:47 AM

The house and couple are so very reminiscent of those times. You show so many pics that we could just swap. Great post girl.

God bless and have a wonderful Wednesday!!!

Old photos are such fun...they make you realize that the old people you know were once as young and fun-filled as any kid...it's hard to imagine...

The 1940's were a special time for me in my grandmothers house.
Patsy

My grandparents had a front porch whereby we would all sit outside and they would play music (guitar and fiddle). Sigh! Growing up was so much fun.

Times may have been hard but they were better off for it, IMHO. Kids today would never think to roll up the rug and dance, and that's too bad.

photogs like this really capture the good ol' days

Those days of 'cheap' fun were probably some of the best too. It shouldn't cost a fortune to have a good time. This photo reminds me of some I have of my mom and dad together. The clothes and look are so similar.

Quite the dashing couple! Too bad you could never find the house :(

we've lost something. don't know many who roll up the rug and dance at home anymore. Too busy on the internet. sigh.

They were a slim couple and very attractive. I like pictures of people dressed up - - - especially when the clothes so represent the era.

cool picture! Remember we used to move our kitchen table out of our little kitchen and dance. Growing up there was plenty of room in the dining room, and we'd practice and then get to go to Chateau Paulette's w/Mom and Dad to dance around the fire place!

What a wonderful front porch. And looks how tiny and delicate she is!

Great picture!! Wish I lived in a simpler time ...well sometimes that is!!

That last sentence was one I heard a lot during my childhood and my dad did his best to show how it was done. Must be why I still prefer homemade fun with real people.