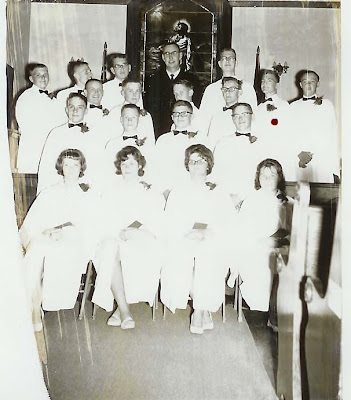 This is Far Guy's Confirmation Class. This was probably taken in 1964 or 1965. ( I marked Far Guy with a red dot!)  Far Guys Dad took this photo, or someone that had his camera..I can tell because it is a polaroid. Eighteen kids were in this class..Pastor Malotky had his hands full (He is also the Pastor that married us in 1969). In the Lutheran Church Missouri Synod children are forced to attend confirmation classes for two years..back then it was Saturday mornings. So lets see..you go to school five days a week, then on Saturday you still have to get up to go to Confirmation..and then Sunday of course there is Church.

In the spring there is fishing, and two of these teenagers had fathers that were going off fishing. The boys who I will not name..but I dated both of them.. promised as God was their witness if the Pastor would allow them to go fishing that they would attend church every Sunday for the rest of their lives.

Memorization..when was the last time I consulted the "what does this mean" part of an article or a commandment.. I will tell you when..in confirmation. Far Guy had to memorize them and say them out loud if selected. In my confirmation class, our Pastor was old and he let us say them as a group. So we used to play hangman during confirmation class. We didn't have a proper classroom in the old country church, so we just sat in the pews of course no one ever sat in the front pew. So you could hide out behind the high backed pews and play games all morning. Our Pastor was old and plump, once he got sat down..he hardly ever got up again until it was time to waddle to his car. His car was an instrument of God..one day in the spring..the culvert was out and his car and God flew him safely to the other side.

I believe confirmation is important, but it should be something started when the child is young..way before they want to go fishing or learn to play word games. I also believe that these men of God should keep things realistic for their students. Who in their right mind would extract such a unrealistic promise from young boys, and who would entertain their students with tales of miracle flying cars:(
Posted by Far Side of Fifty at 11:00 AM

Great photo! I believe people should be confirmed when they're older as it should be their choice.

Far Guy has quite a twinkle in his eye!

Oh, are you saying that you don't believe his car flew him over the culvert??? ha ha. I also think there's a lot more to confirmation than having to memorize certain lines...my (Methodist) confirmation in the 70's was all about what it means to lead a Christian life. Not memorizing.

No matter the religion or the ceremony I do believe the person need to be old enough to understand their commitment to God. It's the most important action you will ever make. I'm so glad ya put a red dot on Far Guy so we could spot him.

Ya'll have a wonderfully blessed Wednesday!!!

You are so good at these Wistful Wednesdays. The way you write, I feel like I was just sitting in your kitchen going over some old picture. Religion is so individual, but I also agree we need to understand what it is we are actually saying we will do when we get confirmed. I didn't know until I was much older what even the word "commitment" really means!

Four years ago when my grandson was confirmed he really had a grasp of what he was doing and committing to and he still does to this day. I think his pastor did an exceptional job in teaching his confirmation classes. It was one of my proudest moments watching him on confirmation Sunday - I cried like an old fool. I guess all depends on who teaches and how the classes are taught.

I remember my confirmation. I was 9 years old. Well, I don't think I actually ever finished it. My Mother had just remarried and our new "Dad" made us go to his church and take these classes, which we (my brother and I)HATED. We were thrust into a boring old church with stuffy old people. We felt trapped. It was not a good introduction to God, that's for sure! Perhaps if we had been raised differently up to that point it would have been different.

For many years after that I avoided going to church at all, unless there was a wedding or funeral. When, as an adult, I finally got my act together I learned to love church (much to the relief of my folks).

I don't know if age really makes a difference. I think it depends on the kids and how they view God and the church.

It is really sad that a pastor/priest can make or break a persons commitment to God. But that is what happens. If you have a good experience you commit to God; if you have a bad experience you end up turning away from God. Memorizing isn't the answer either. I feel learning what it really means to be a Christian and a child of God is what it is all about.

Ahh memories, I have them Catholic style, nuns and priests, holy water and confessionals, stained glass windows and unpadded kneelers, I'm forever thankful they introduced me to my Savior.