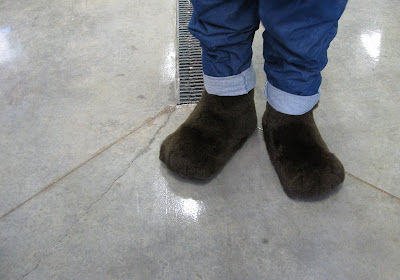 We had a celebrity visit our area yesterday.  He had big feet and scared the local children..because he was just too big!  Jordon said he would high five him if he was smaller..Gavin stayed way back..he wasn't even getting close. 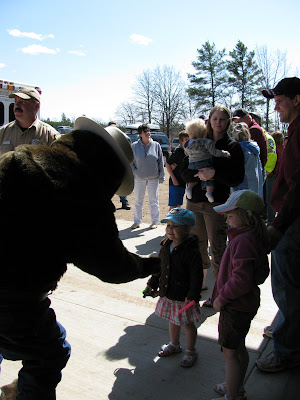 Eventually the little girls were brave..especially Olivia and Hailey.. 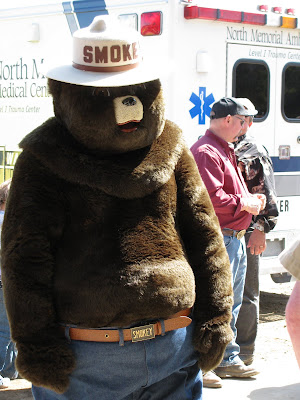 Northwoods children are often told..Bears live in the woods. This becomes ingrained into our children.  I once told our Grand girls that there were no bears, the girls were following me very closely on our walk..hanging onto my pants legs, whimpering about bears. I so brilliantly stood in the middle of our drive and shouted " Bears, you pack your bags and move to Hawaii."   This worked for a couple of years then when their parents talked of going to Hawaii..the littlest(Paige) broke into tears..because that is where the bears were..being a Grandma is sometimes difficult. 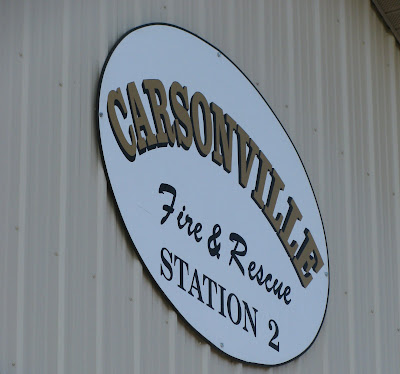 Smokey The Bear was here for the Grand Opening of the new Fire Hall (Carsonville Station Number 2) and the Osage Community Center.  There was cake and coffee and a time for visiting...the acoustics in the Community Center are horrible..as was noted to me by everyone that I spoke to that had a hearing aid.  There is no carpeting on the floor and no drapes to absorb any of the noise..so it just bounces around the room..until it is impossible to carry on a conversation.  It all becomes a hollering contest to see who can be the loudest.  We had coffee and left.  It won't be on my list of places to rent for gatherings.

The Fire Hall part is very nice..a great addition to the community.  Now if the township could just afford a few decent firetrucks for their brand new hall..for now they are dependent on Station Number Ones extra equipment.  It will meet the requirement for the Insurance companies less than five miles from a fire hall discount rule, so that homeowners on that side of the lake are able to get their discount. I imagine that some of the people over on that side of the lake will complain..and pretty soon the parking lot will be paved so they don't get their feet all muddy when it rains.  They got a mile or two of blacktop a few years ago because some old ladies in Cadillacs complained about their cars getting dusty on the dirt roads...so a little bit of blacktop in the parking lot should be a piece of cake.

Oh, I should be quiet now..I sound like a grumpy old bear myself.

We don't often see Bears in Minnesota..I have only seen two in my lifetime..one ran across our driveway in front of Far Guy and I years ago.  The other one woke up during an Auction sale I was at when the mobile food wagon was frying up hamburgers.  Our neighbors Al and Erna woke up one morning to muddy paw prints on their windows and their bird feeders empty... my cousin Geraldine had one on her deck looking in the kitchen window..she is a really good cook!  As soon as she called for help..the bear high tailed it into the woods..I told her she should have taken a photo..she just giggled at me:)
Posted by Far Side of Fifty at 12:10 PM

Smokey the Bear is looking pretty good for being as old as he is. I remember him from when I was a kid.
My granddaughter isn't afraid of bears, but she sure is afraid of bugs - even itty bitty gnats terrorize her. It is an adventure trying to spend time outdoors and soothe her fear of everything that crawls and flies.

Now I've got the Smokey the Bear song stuck in my head. Oh well there are worse things eh? I'm surprised they still do Smokey, so many things from our childhood are being eliminated I would have thought that "they" would have found something terribly un-correct about him. OOPs now I sound like a grumpy ol' bear. My uncle and dad both had the head of Smokey that was a magnet to stick on their dash boards (imagine that, a metal dash board and no seat belts required) and right behind the top of the hat it was cut away and there was a hole where cigarettes were stubbed out.

You are such a good grandma! Scaring the bears so far away... what a wonderful sense of humor you have, and you write it so wel. I really enjoyed reading about this, Connie. And you are NOT a grumpy old bear.

I just spent some time over at your old picture blog!! Love it!!!

You never know what to tell the Grands these days!!

Sounds like a fun day. Smokey the Bear has done a GREAT job for how many years (?) educating people. He was someone's great brainchild. And Smokey is so opposite of a real bear. He is sweet and cuddly - - the total opposite of one who is wild.

Oh, Dear Old Smokey is holdin' up well! I looked like a fun time to celebrate the new fire hall. Yep, sometimes we Grandmas just say the wrong thing tryin' to do the right thing.

Ya'll have a beautiful Sunday!!!

Last term, My theme story with my 5 to 8 kids were Goldilocks and the three bear.

Has old Smokey got fat in the middle?

Re: Wheat bag. Yes, it serves the same function. Now I have a question that I have been wondering. Because my friends couldn't find wheat in Singapore, when I suggested that they use rice, they say that rice wouldn't hold the heat as much as wheat. What do you think?

With heat, 3 minutes in the mircowave and it is hot.

Also, if rice serves the same purpose, rice is half the price of wheat.Maybe I should experiment with rice.

The people in NZ claim that they "invented" the wheat bag. I always wondered.

Once upon a time, those info ads showed an expensive buck wheat pillow. Ever seen them?

Thanks for the newsy article -- I'm not sure where I've been but I wasn't aware of the open house -- shucks I missed it....

the Love Smoky the bear photo! And hurray for a better Fire Hall... next up some new trucks...

Good coverage on the open house! You write so well! We were gone last night and today - yes lets get together this week!!!

Connie - I tagged you - check out at my blog to see if you want to participate. It's a photo tag. jo

OHHHH I love smokey the bear.

I've seen bears not far from where I do my walk.
In fact, a friend lived up further on the creek - and was out picking berries with her husband. She saw bear poop and said "honey, I'm walking back up the hill to the house - I don't wanna see a bear." He said, "You're such a scaredy cat - the bear is long gone." So she got to the top of the hill and turned around just in time to see her husband walk around a big blackberry bramble, face to face with mr black bear.

She heard him scream and then run on all fours up the hill.

Last summer we had a teeny weeny cub run out in front of our car. I thought it was a poodle at first. ha ha.

Bears used to scavenge a little dumpsite not far from our cabin; people would drive there in the evening to watch. And we had a bear wander into an area where our family was picking blueberries. My mother very calmly told everyone to set down their pails and back quietly away. By the time we took a step or two, the bear wandered off the in the other direction...and we all went back to what we were doing!