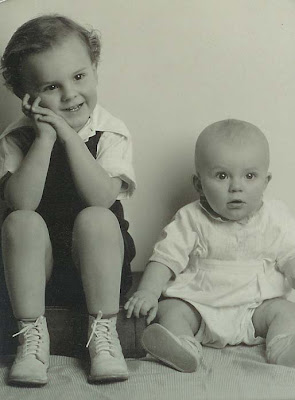 Cute little boys!  These are two of Far Guys cousins, I admit it..I kinda laughed when I looked at this photo..the littlest boy was pretty much bald even then.  I can look at these photos and figure out who they are...I am wondering who else can in the family?  These two boys are blog readers that never comment..and that is just fine.  This photo was taken just about sixty-eight years ago.  I had Far Guy look at this photo..he said the oldest boys eyes were the recognizing factor for him.

Time just never seems to stop..and the years just keep rolling by faster and faster.  Last summer I completed part of this old photo project..I wanted to scan all the old photos and get the originals back to the people that would appreciate them the most..the people that were in them.  I did..then I found another manila envelope full of snapshots..so they will be getting more old photos sooner or later.  Some are marked..some are not..some I can recognize..some I cannot.

Some photographs are really hard to date, this one I knew had to be taken in the 1940's.. the littlest boy was born in the spring of 1941..so that pretty much solidly dates this photo as being 1941.  Things I like about this photo, the way the boys are dressed and I like the way the oldest boy has struck a pose..he is pretty darn cute.  I have a sneaking suspicion that this photo may have been taken and given to some very proud Grandmas:)

Look at the way their eyes are shining with delight - it's too adorable. Lovely lovely photo.

It's very cute and just perfect for a proud grandma to display!

Vogue~strike a pose! They are sweeties. Thanks for sharing your wonderful photo!

You never see those kinds of shoes any more, either. He would be in tennis shoes, without a doubt, if it were taken today...

Great pose. This is a wonderful project you have undertaken. I am sure you are making many people happy.

This picture is adorable!

Whatever happened to high top shoes like that. Kids wore that type for years. I even have a bronzed pair my son wore.

I love your analyzing of these great old photos. It's so neat that they're getting their second chance to shine! Who'd have thought, back when they were taken, that they would be up on a blog someday (blog?) for the world to see? :)

I agree with LadyFi there is such delight and excitment in thier eyes. The wonder of being little and something new to learn...