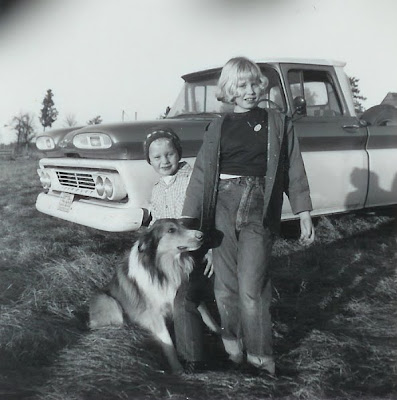 I  believe this photo was taken in 1958.    My brother and I and our Collie "Spike".  Spike was full grown when we got him in the Fall of 1957.   I believe that we got him from someone that could no longer keep him.   My brother and I adored this dog, Spike was smart..he followed all the commands..sit, stay, come, lay down and shake.  I was in "Dog Heaven".  Honestly this dog was so smart it was like having your own personal Lassie.

During the summer, my Dad worked for a Construction Company..the summer of 1958 we left the farm and lived in Atwater, Minnesota for the summer.   Spike went to live with Joe ( the guy with all the horses).  Fine and dandy we got our dog back in the Fall.. Yippee..it was good to be back on the farm.  The next summer we were in Stewart, Iowa.. and my parents gave Spike away.  Spike went to a good home..he became the best friend of a mentally handicapped child.   Well this is all well and good..but it did not make me feel any better.  I cried buckets over that dog.  I wanted my dog back.  I thought it was horribly unfair that he was given away without a second thought.  At one point I demanded that he be given back..because he was ours..he didn't belong to anyone else..I think I may have even stomped my foot once or twice.   It was then that I learned that life was just not fair.  My parents wouldn't even let us go and visit.. I looked at all the retarded kids I saw..and wondered silently " Is that the retard that has my dog?"     I guess I was a pretty selfish kid, the next summer we stayed  at home and my Mother started farming again.   This is the only photo that I know of..it was taken during Deer Hunting season.


Spike  was the third collie that we had..the first being a collie cross that was white and named Frostie ( he is the ghost dog..he shows up in lots of photographs in the background) , the second one was a pup..I believe we got as a gift from my Maternal Grandparents..they loved dogs too..anyway I cannot remember that pups name..we got him in the winter..and that next spring he died of Tick Fever...after that I religiously picked ticks off of all our dogs..and everyone's else's dogs too.  I often think of Spike, I hope he lived a long and happy life.

I have loved dogs for as long as I can remember.  They have brought much happiness to my life..and some sadness too..sometimes I ask myself if the happiness is worth the sadness.. I guess it must be.  My parents could never understand my deep love for animals,  they knew I had it..they just never seemed to understand it.  It was always considered a flaw..I never considered it that way.. to this day I have shed more tears about animals,  especially dogs..than I have over people.   I really do like some dogs more than I like some people:)
Posted by Far Side of Fifty at 11:53 AM

OH! I SO AGREE WITH YOU! I had a dog Tippy that my folks gave away, oh yes, I forgot..the REAL owners showed up to claim him.

I also lost a dog to a nasty Mac Truck that I still love and remember. Heck I remember them all and my cats and my sheep and my horses.

I want to go to heaven and be with all of them.

I hear you! When we were kids, our parents found new homes for at least 2 cats, and 2 dogs. Allergies were cited, and they were severe, I'll give them that, but still. That agonizing feeling of loss, when you come home, and your pet is gone.....

He only wants a few cats, and dogs.

I have the exact sentiment about dogs that you have. My best friends have been of the four footed variety. They are trusting and forgiving and I can't think of better qualities. It had to be a heartbreaking ordeal losing your collie. My border collie was my constant companion for 14 years as a child and if I had lost her, I would have been devastated. I know it sounds odd and people who are not 'dog people' can not understand, but I think having a dog makes us a better human being.

Awwww, sweet story about Spike. I had Tiny, a dog the doctor recommended to replace my imaginary dog at the age of three. Tiny lived 14 years as my faithful companion. So hard to lose a faithful friend like ours.

A dog is a soul mate and meets you where you are. People don't meet up to that standard in most cases. I always sense their dependence though and that is the part where they show their most love. Thanking you for helping them to fulfill their needs and happiness. My silly little white poodle can give me two licks on the face and I know he needs to go outside at night,and I take him as he never makes a single mess in my house and I appreciate that and Barney can lay his head in my lap and melt away all of the day's cares.
I have lost a poodle that I never knew what happened to him. He ran away from my parents on an already bad day for me. I still mourn him and wonder who took care of him the last half of his life. Your story is great, and your collie brings back memories of my neighbors collies. You could see them carrying home in their mouths big bags of garbage from some neighbors curb.

The love we get in return from our furry loved ones is so special and makes them special. They love us unconditionally and they don't talk back. I have loved dogs all my life too.

The love you have for your dogs is one your parents will never know nor understand. Anyone who doesn't feel that emotion can't I can honestly say that my dogs have and do bring me more joy than almost anything. Oh I would give my life for my kids and grand-kids but they are not with me nearly 24 hrs a day. They don't follow me around, send me off and greet me when I come home. Get excited when I pick up poop, so excited they leave me more just so I have more to pick up! Those other people who don't understand and say ewww don't like the kisses you get either!

Amen! I also agree. Dog people are different/special. When I was dating my husband and saw how he acted around dogs I knew the quality of his heart. I knew this "guy" had potential! LOL.
Great story, Far Side.

Wonderful look in to a childs mine. Sad for you but I think you came out as a careing person.
Hugs Patsy

Yes, four feet often win out over two-Spike looks like a wonderful dog (and the kiddies and neat truck are a treat too).

The only real problem with dogs (and other wonderful pets)is that they don't live as long as we do. They are truly pure in heart, not like us.

Pets are amazing. I enjoy seeing your photos and hearing stories of your pets in the past. Pets and their love and devotion can do wonders for people.

Nice story about Spike - I also have grown up an animal lover.... I can tell you my dogs and horses know many many secrets over the years...I cannot imagine being without a furry friend.

What a nice story! Thank you for sharing. Dogs are wonderful pets!

Oh, gosh - how awful for you to suddenly lose your pet and have it given away. My kids would be heart-broken if we gave away Oscar!

Collies are such lovely, intelligent dogs.

What a wonderful and nostalgic post! I grew up in St. Paul and never had a dog. Now living all my adult life in the country we have always had dogs. My impression is that our friends and neighbors, who are farmers tend to see their dogs in mostly a different way. They have a more functional view of them. The dogs are "outside" dogs and give warning when salesmen come up the driveway etc.

Yes -- some dogs are much more worthy of our love than some people are! Thanks again for sharing such a wonderful heartfelt story.

Great picture. Sometimes I wish I could have a zillion different dogs. There are several breeds of dogs I have always wanted.

animals were not pets to many of our ancestors --
and like someone before me said, the same with many farms and ranches.

I guess I've just been too much in love with my pets.