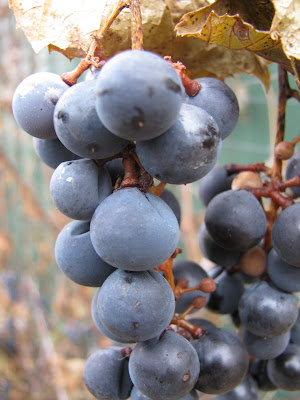 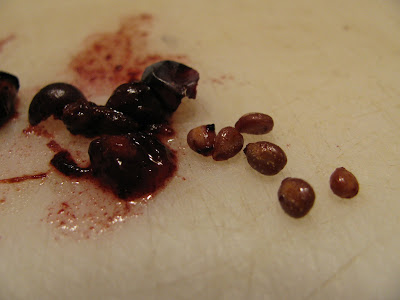 Oh these darn dogs that will eat "anything". Now you won't be able to watch the bird or others eat the grapes.

I'll say that you are a pretty good detective! Yes, my niece has sent me several emails about raisins & grapes being so dangerous for dogs! I am glad that both she and you remind us pet owners from time to time. Just like Shelley and her Bernese Mtn. Dog getting so sick from a rawhide bone. Blogging is a great way to warn one another. Hope you have a good weekend.

I think that my sister's dogs loved the frozen grapes too. But they didn't eat too many of them, or not enough to get sick on them.

I am starting to see a pattern here. First is was cow poop in a previous post this summer, deer poop the other day, and now it is dog poop. Connie you are poop obsessed. This was too funny!! I needed a laugh today. Thanks. And yes grapes and raisins can cause renal failure in dogs. I found out the hard way with a dog I had.

You are just the Dr. Oz of dog poop. My bad, I have never really studied, dissected or theorized what was in Tiger the Wonder Dogs poop. He's runnin' all over the Ponderosa, I'd just hate to think what he's gobblin' up.

Have a super weekend!!!

I can see the Medic in you coming out! You Go Girl! Once more you bring to us your knowledge of health and well-being. I THANK YOU soundly.

Now off to check Fuzzy poop!

It's weird the things that can be bad for our animals that just seem so darn harmless. It's hard to keep track of. I'm hoping the peanut butter and jelly sandwiches and bananas I share with Luke don't kill him. I figure 1200 lb animal, half banana and 1/4 sandwich, probably okay.

I just read that grapes weren't good for dogs about a year ago. Ours used to eat them regularly. Who knew?

I also didn't know about the grape thing-thank you!!

I don't do much poop poking but it was good that you did. I now remember reading that too. So glad you thought of it before Chance got sick.

Deer ticks are awful now. Frontline does not seem to work as well on them as the other ticks.

A girl has got to do what a girl has to do -- and if it is going thru poop it is going thru poop! i have a girl cousin who is "warped" about human poop -- and is always asking questions about poop! I now laugh because she has two young children of her own and has had lots of experience with poo.....

Hi Chance,
Don't you know that those things are bad for you? I hope you don't get sick. I might have to come out there and give you Royal kisses!

We have to deal with purple poop with our guys. They love to eat the mulberry windfalls. Thank goodness they are done for the year.

Oh, the joys of poop! ;-) Oscar loves grapes and often eats them... perhaps I'd better stop that!

People may think you are strange, but poop watching is actually a great way to check on your dog (or cat) and the health of the animal. We had tape worm problems with Peanut this year and I told the vet that it was my entertainment - watching the poop to see if the dirty buggers were there or not. And I can tell if she's gotten into anything because she is so little (compared to Chance) that any little thing comes out strangely.

Good job, checking him out - it's better to be safe (and weird) than sorry.