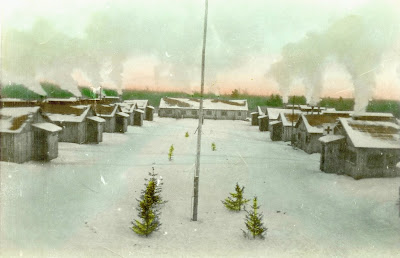 The Civilian Conservation Corps was part of the New Deal proposed by President Franklin D. Roosevelt. It was a public relief program for unemployed men after the Great Depression. The CCC workers worked on natural resource conservation from 1933 to 1942. They built buildings and made roads and trails in State and National Parks.
Far Guys Dad worked in the CCC Camp at Lake Itasca in 1936. He recalled a really cold winter. The deer were starving, so they were told to distribute hay bales, the deer kept dying, but their bellies were full of hay. Deer cannot digest hay in the winter their stomachs are used to twigs and what ever else they can browse. In the spring he helped to plant trees and clear out trails around the Headwaters of the Mississippi.
This photograph was taken on February 10, 1936. On the back of the photo is the date and this notation. 52 BELOW ZERO.
I am hoping that my Grandchildren will take note of this story someday, perhaps one day when they walk across the rocks of the Headwaters on a warm day they will have a new appreciation for the cool shade of the tree lined walkway back to the parking lot:)
Posted by Far Side of Fifty at 10:27 AM