Yesterday the carpet installer came to measure, after he was finished Far Guy and I went and ordered the carpeting. It will not be here until the end of March..naturally I picked a color that the warehouse in Georgia did not have on hand and it is not in their production schedule until March 7. So I have lots of time to go through everything up there and organize it. We have to move everything from the east and move it to the west, then he will lay that section of carpet and then overnight we have to move everything from the west to the east so he can do that section..so it is a lot of moving. He would have liked us to move everything downstairs ..we told him.. not an option.
If we used the area upstairs more I would have gone with tile, and I would have done the project myself. I am sure it is very hard for people to understand why we have a whole level of our house that we don't use. When we originally built the house Far Guy wanted a loft, so he got 1,000 square feet of a loft. He thought it might be nice to have a bedroom suite up there. He could wake up every morning and gaze out the french doors into the woods. Well we love our cozy area downstairs and never entertained the thought of moving up there ever again. So it is just an unused place. Chance rarely goes up there, I go up there once or twice a week to put something away and to flush the toilet in the bathroom. Far Guy goes up there when he plays/ works on his train set. I do go up there about once a month to dust and vacuum the floor..and wonder why I have so much crap/stuff I hardly ever use. Someday when we sell this house the upstairs may be helpful, as it is a blank canvass, it could be three large bedrooms, two which share a large walk in closet. Or it could be two bedrooms and a huge family room area. The possibilities are endless.
When we were building, lots of people asked me when I was going to move my kitchen upstairs. My reply of "Never" caught them off guard. We only have a kitchen because Far Guy insisted on it. I had one acquaintance tell me that she would not ever live on the lower level when the upper level was so nice. Well, it is a pretty area, I like it too we just don't "live" there.
Here are the colors ..which do you suppose I chose? 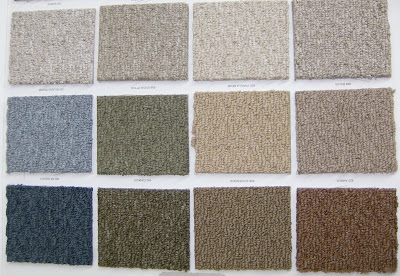 The brown in the far right corner...actually it is called Amber..and Far Guy is holding the display sample upside down. Brown according to my daughter Jen is the new black. It will go well with the knotty pine walls, and when and if my downstairs furniture ever makes it upstairs it will all go together..cause it is brown too. I like brown.
Thanks for all your input! I thought long and hard about laminate, until I visited a few places with laminate..some of it has shrunk and there were gaps for dust to collect in, some had warped, some had delaminated. I have had a number of vinyl floors also..they were OK. I even ventured into the real wood floor zone..way too much maintenance for me. I visited a cottage once that had pine floors, it was lovely, but pine is a soft wood. I loved the green carpet too..but it is limiting from a decorating standpoint, so brown won ..because I can accent with whatever color I want :)
Posted by Far Side of Fifty at 11:38 AM