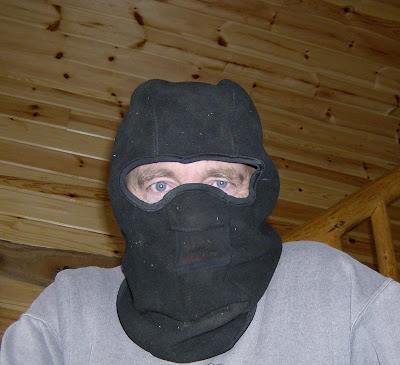 Don't get too excited..it is just Far Guy in his winter face mask. I searched everywhere for a face mask for him. I finally found one at a place called The Duluth Trading Company. The mask had to be large enough to leave some roominess around his right cheek and the right side of his face. It had to be bulky enough fabric to keep out the worst of the wind. This face mask seems to work well, although he does take it off in town..I wouldn't want him to be mistaken for a bad guy and hauled off to jail. Far Guy is bothered by wind touching his face. In fact he is bothered by anything that touches his face..the wind, his reading glasses, stupid people..all things that will cause him a great amount of extra pain on top of his always present pain of the Trigeminal Neuralgia. How do you tell other women... do not hug my husband, your hair brushing by his face causes him extra pain for hours. Sometimes I think I should have a shirt that says "Touch my husbands head or face, and I will rip your boobs off. " He has enough pain..your hug is not going to help..you dumb broads.
We are still in part two of the new medication. Far Guy had a few really rough days, and nights. So much so that Chance became a "Mother Hen" ..it is something to watch. Chance decides when Far Guy should lay down on the couch, he gets his attention usually by putting his head in his lap and then leads him to the couch..as soon as Far Guy is settled down..Chance leaves. In the evening if Chance decides that it is time for Far Guy to go to bed, he goes into the bedroom and pulls down the covers. (They did have a talk about this, Far Guy told him that he didn't have to be so bossy.) One night Chance held Far Guys hand, he licked it first and then proceeded to hold it gently in his mouth, until Far Guys hand was all wet with drool and he couldn't stand it anymore. The dog is in tune with the man..what can I say ..it amazes me:) 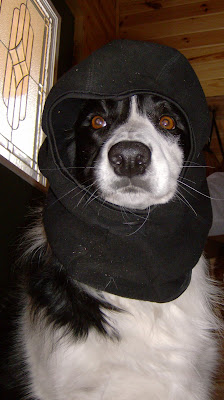