Far Guy got really sick ( coughing non stop and breathing was difficult) in the early morning hours of Monday.  After a two hour wait in the Emergency Room waiting area he was finally seen by a Doctor.   They ran every test you can imagine, he does not have Covid, the flu or RSV and he does not have a Pulmonary Embolism.

He does have fluid in his lungs so they admitted him to the hospital, he will be there a few days...they are giving him IV antibiotics which should work pretty fast.   I left before he had an actual room, the fellow in the bay next to him had been waiting eight hours for a room....so he could be in the ER area a long time waiting for someone to be discharged or a death.  The hospital is full.  The Nurses are not good at IVs there either...ten tries...he feels like a pin cushion.

He was breathing better when I left late Monday afternoon. 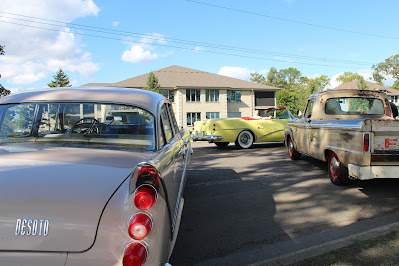 So sorry to hear this about Far Guy. Just thankful he doesn't have Civid, flu or RSV. Praying the doctors can get him well soon and back home.

You and Far Guy are in my prayers.

Oh, that's rough! I'm certainly glad to hear he doesn't have the various viruses, and that he was breathing some better. Hopefully he's only in the hospital for a few days and his breathing continues to improve.

I wonder if it isn't congestive heart failure. My grandma is suffering an episode of that right now with a severe cough and wheezing to breath. But they give her a drug to remove the water from around her heart and lungs, tell her to avoid salt and send her back home when she shows signs of improvement. Every ER trip at the beginning always starts with ruling out everything else you mentioned above.

Oh dear! I hope his stay is short!

Praying that things are brighter this morning. It is so sad that our hospitals are so overcrowded. Our governor in Ohio has deployed our National Guard to help and our rural hospital is supposed to have ten members assigned. We have a scanner and as of this morning our hospital and the closest larger city hospital are both diverting (not accepting) ER patients. I will be thinking of both of you all day. Prayers.

10 sticks? That is insane & inhumane. "2 sticks & you're outta here". When did he have his port removed? Has nursing/medical care devolved this much since I retired not too many years ago? Hoping the meds/antibiotics do their jobs & Far Guy is seriously "outta there"! Take care.

I hope he's better soon and can leave the hospital. Ten sticks? Oh Lord I bet he really does feel like a pincushion. Sending my fervent wish for a quick recovery.

He has had four ports, they always plug up. The last port was good for less than a week. Even with the Infusion girls using them once a week they would plug.

Oh! My! Gosh! My prayers and hopes and wishes are with you and Gene for a quick recovery!

Awwwwww.... :-( I'm so sorry to hear this, Connie! *sigh* I will continue to pray for Far Guy. And you'd think that the ER nurses would be expert at IVs, wouldn't ya? I mean, they have to start IVs on the sickest of patients. Just goes to show... !! I feel so badly about this. ~Andrea xoxoxo

Praying right now Connie. I'm so sorry that Far Guy is in the hospital but hopefully will soon be much better and on the road to recovery. I'm glad that you are so close to medical care, even if it is slow. I think it's like that everywhere right now. I'm so glad that they FINALLY got an IV in. I've been there. It seems the nurses in the ER were the worst at putting them in. They always end up calling phlebotomy for mine.
Take care and lots of love for both of you.
Blessings and hugs,
Betsy

The hospital situation is much the same here so we are keeping our fingers crossed. I am so sorry to hear this and I am thinking of your both. IV's stink when your veins are not so great.
My ex husband used to teach Paramedics and he always made them practice several times on themselves so they could feel the pain of a bad stick.
So sorry.
Hugs.

I hope he keeps improving and feeling better. My daughters have said similar conditions exist at the hospitals they work at. Patients wait too long for beds. I know my older daughter was very stressed at Christmas over that exact problem and was furious at her MIL who had just told her that the hospitals were lying to us and not really full.

Then the infusion folks should come up with a option for him. This 10 sticks is totally b......t. Even I years ago drew blood from between a cancer friends' knuckles

I hope Far Guy is healing and home soon.

So very sorry to hear that. I hope the antibiotics work their magic and he is home soon.

I’m so sorry. It’s something of a nightmare to be ill when hospitals are so over taxed. I hope he is in good hands and gets good care, and I’m glad you have your family near for support.

Sending all my love to you and Far Guy, and hope he will be home again soon. Mxx

This not what we like hearing, hopehe recovers soon

So sorry to read about Far Guy, praying and hoping that he will be feeling better real soon.

Ugh! 10 tries! Hope he gets to breathing regular again. I have never liked needles or nurses with needles.

None of this is good news, but hopefully he will get the care he needs so he can get back home to you soon.

I am sorry that this happened but he is safer in the hospital. I like that they can eliminate all of the bad things and perhaps the fluid will go with antibiotic. Monitoring the lungs is better than him coughing without knowing why. Prayers for you both.

I'm sorry that Far guy has some difficulties and I hope that he rapidly recovers with some medical help.

Dang, not the news we wanted hear. I hope things are looking up today! Sending prayers and hugs!

Oh my gosh, I'm so sorry to hear that Far Guy had to go into the hospital. Praying he gets much better soon. Praying for you too, Connie! God bless you both. So sorry to hear about the 10 needle sticks too. OW.

Nooo! They should be GOOD at IV in emergency! That is so unfair. This is one of the worst problems about covid and all these people that won't get vaccinated. They are taking up valuable hospital space, so people who really need it can't get the help they have to have! I hope he gets treatment and a room soon, and then is home soon too!!

Wishing Far Guy a quick recovery and then back home soon. Glad you are closer to doctors and hospitals this winter and it was caught quickly. Take care.

I am sorry to hear about this. I hope he heals up quickly so he can get out of the hospital. You are both in my prayers.

Oh, poor Far Guy! At least you can rest a bit knowing he is in good hands except for the people who can't seem to find his veins! Oof-da! So glad you are at Jen and Andy's.

I feel for you…deeply…I remember…

Keeping Far Guy and you in my prayers.

Will keep him in my prayers. Try not to worry too much.

I am so sorry. What a burden during all this new normal.
I am so glad he is home. I am happier reading backwards, knowing he is safe with you!