Years ago...probably about 13 years ago...the little girls were talking with their Grandpa about what they called "the olden days."  They were either mesmerized by his stories or bored silly.  Peals of laughter were heard throughout the house...and shouts of " Grandma is that really true? "

Well being a good Grandmother I had to stop and listen...mostly true...except for the tall tale "Oh my burning feet " that he would tell them around the campfire...they always asked for that story knowing it was going to be good and scary, they would end up screaming and covering their heads...as I recall he told that same campfire story to our daughters and they had the same reactions.  How in the world he expected them to sleep after scaring them half to death I will never know.

We laughed yesterday when one of the girls called us with a request.  Grandpa complied, it brought back many good memories.  As requested he wrote on the sheet of paper and took a photo of it and sent it on.

Later he got a photo. 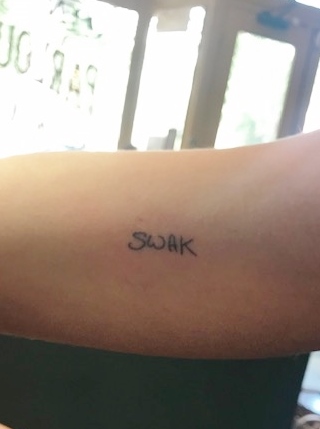 His handwriting on a grandgirls arm. It made us recall all the laughter on an afternoon long ago.