Far Guy made his Seafood Gumbo. ( I helped, I cut up the peppers and deveined shrimp) anyways... I needed space in the deep freeze for it....out came three quart jars of frozen rhubarb.  (Friend Jill gave me all the fruit from her deep freeze when she moved to Florida.)  Far Guy says "What are you going to do with that rhubarb?"  He doesn't really care for rhubarb. 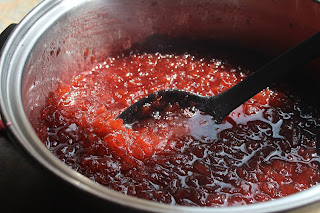 I measured  a bit then just dumped it all in the pan...added sugar and dumped in all the pectin I had...then a box of raspberry jello just for good measure...it makes the rhubarb look better!  I mashed it up with the potato masher and stirred...it smelled really good cooking.  I had no idea if it would turn out or not...possibly not a jam but a runny ice cream topping.

When it had cooled a bit.  I put it on a biscuit and took it outside to share with Far Guy...he was wood carving in the sunshine whilst I was slaving away at the stove. 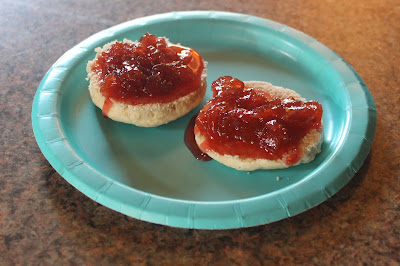 It was declared delicious!

So much for that someday project at the bottom of the freezer.   I shared with my parents, my other baby brother and niece Stacey.  I put it in plastic containers...forgoing jars, lids and the canning bath that are the usual for jelly and jam.

One small container made its way back into the freezer.  Old frozen rhubarb makes great jam!

A bit swirled in my Greek Vanilla Yogurt is a great lunch!
Far Side