It is that time of year again. 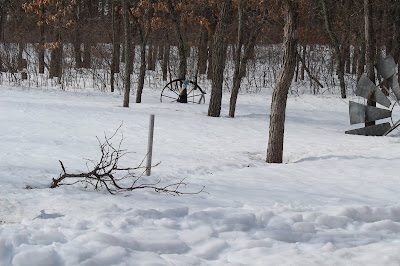 The snowstick is at 14 inches...when will it be free of ice and snow?   See that ridge of snow...it came off the roof and almost made it to the snowstick!

Leave me your guess...   just a date will do.  The winner will get something in the mail.   Not sure what yet but it will be worthy of a good guess!  I will accept guesses until Sunday evening at 9 PM.   Those shy people can email me with their guess.

I worked on some bark carvings last Fall and had some carvings almost ready to paint and I put them someplace safe...can't remember where that safe place was...but I shall be looking for it.