The grocery store was out of several items that were on our list.  Carrots... who knew there was a rush on carrots....maybe people have more time to peel their own now.  English Muffins that Far Guy likes to make egg and ham breakfast sandwiches and Pillsbury Biscuits that I wanted to use when I resurrected some Thanksgiving Turkey out of the deep freeze... for Turkey and Gravy over biscuits.

I spring cleaned one of the kitchen cupboards.  I filled the flour containers...I use a mix of white flour and wheat for bread.  I wanted to make sure I had enough if it comes down to me making bread.  I had a bag of self rising flour...so I decided to see if I could make biscuits. 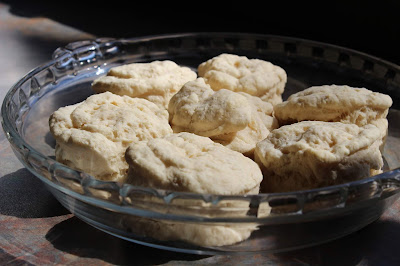 I could and they are really good!  They are a bit tall and rustic looking!  Far Guy said they were really good too...I handed him the recipe card and said "You can do it! " 2 cups self rising flour, cut in 1/4 cup butter then add 3/4 cup milk stir well and then knead make biscuits bake 12 minutes 400 degrees on a greased cookie sheet.

My new yarn arrived earlier this week....I have four shawls in the works now...one will be frogged as I am not happy with it...one is being blocked and two others are in progress....here is one. 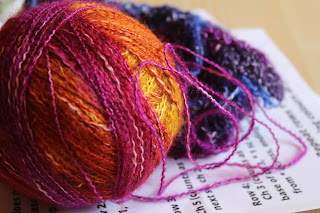 You will see more of this yarn as I had to order five skeins.  It is called Restful Rainbow.  This is another Crochet Along called Keep Calm and Crochet On hosted by a gal on a facebook crochet group.

Far Guy did most of his walking outside yesterday.  I started  to watch a show called Tiger King on Netflix.  (I have to keep closing my eyes during the sssnake parts and one time I forgot to open them back up and fell asleep.) This week I watched Valentine's Day and give it a 9 out of 10 stars....a fun movie.
Far Side
Posted by Far Side of Fifty at 3:00 AM