It takes lots of cousins

In that box of memories I unearthed was a fancy apron. 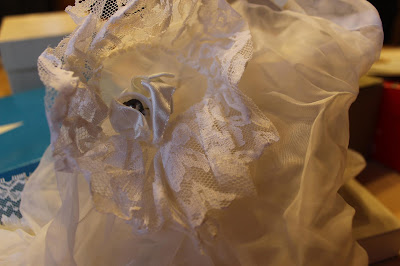 I know it is a wrinkled mess but you get the idea. It was a sheer half apron that was short and had lace trim, it tied in the back. There was a bow and a bell on the pocket.

Year and years ago teenage cousins were asked to help serve the bridal table.  You know go for coffee refills and fetch extra napkins and make sure everyone had what they needed.  At our wedding the "waitresses" were my cousins;  Diane, Vickie and Max short for Maxine although most of the time we called her Zeeny.

In fact it took a village/lots of cousins to have a wedding reception in the church.  Far Guy had some cousins that helped out also and probably wore the pretty little aprons! 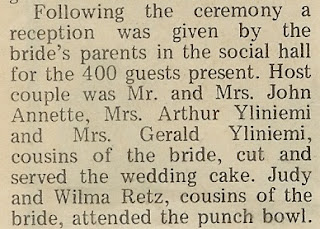 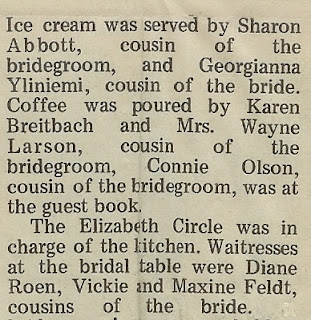 Coffee was poured...the gals sat at the end of the table and poured coffee from a silver service and presented the cup  on a small plate.  (Is that correct Bonnie? She reads my blog too!) Yes we had punch...but I do not recall the ice cream. (Sharon...she reads my blog... was there really ice cream?)

I think 400 people is a stretch...but there were lots of people on that cold December day.

Note:  50 years ago all the women that were married are a Mrs somebody...if you are married you lost your first name.
Far Side

Update From Sharon: Yes Connie, you did have ice cream and I was so nervous serving it because there were so many people!

Update from Bonnie: I remember serving coffee on a fancy china plate☕️.
Posted by Far Side of Fifty at 3:00 AM