We thought we had an early appointment yesterday...and then it was cancelled.  So we are tired.  Far Guy was up at 5AM...me about 6AM...I am so not a morning person.

Then for my afternoon appointment we had to wait over an hour.  As I was going up to the desk to find out if there was a death in the Ultrasound Dept I was ever going to get called, the gal finally showed up.  The diagnosis...I have a cyst in my right boob that the Radiologist saw on my Mammogram and he was concerned.  Now he can sleep better as he was a real pest about it all.  He wanted another mammogram and I refused since I am black and blue from the one last week...so he settled for an ultrasound.

We did the weekly grocery shopping and came home and had a nap.

I worked on some cards and started painting some Christmas Ornaments....I think this first part will look just fine.  Part two is still in development stages ( still in my brain.)

Far Guy is back on steroids for his shortness of breath. 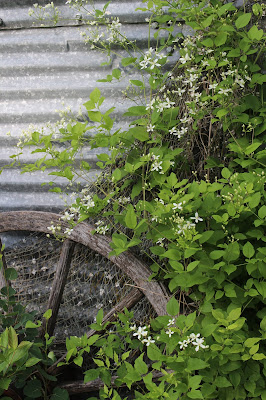 The Clematis has spread over to the wagon wheel!
Far Side
Posted by Far Side of Fifty at 3:00 AM

So glad to hear everything turned out okay with the lump and it is just a cyst. I know what you mean about the mammogram making you black and blue. The last one i had I was in excruciating pain for weeks. Still praying for you both.

One, I love the wagon wheel and clematis,....thanks for the beautiful idea!
Not good on the shortness of breath...keeping FG in my thoughts.
Mammo's? Dislike. I've had cysts too, no fun.

We've been swamped with appts here too. Yesterday we had to wait for 2 hrs...extra, for Rich to have his MRI. There was an emergency where they had to MRI accident patients and we had to wait. It would have been better if we'd been told by the receptionist instead of having to ask about it.

I hope the meds help FG and I agree with you on the mammos. I have the "dense" business, which I think is just a new buzzword they have come up with to validate 2 mammos and lets throw in a sonogram to boot. I read somewhere that we don't even need mammos every year. But I am so indoctrinated with the fear, I don't suppose I would ever be brave enough to tell my doc nope, see ya next year. Blessings to both of you.

Dealing with doctors is never fun, but it's good to know you have a cyst and not another kind of mass in there. I hope the steroids with help FG breathe better and that the transplant will happen, not a moment too soon. :-(

Doesn't sound like "appointment day" was pleasant. Hate those kind of days. They make me feel like a thing, not a person. Working on the cards and Christmas ornaments sounds reviving.

I told my niece the other day that there was a lot more napping going on at the "house of retirement" (our house) now than before. Goodness sometimes you just have to have a nap to feel better.

I'm glad to hear that the ultrasound found only a cyst. You don't need more medical concerns that's for sure! Hope the steroids help Far Guy with his breathing too.

Glad it's only a cyst. Hope the meds help Far Guy quickly. Some days you just need a nap.

I'm glad it was a cyst. I've had to have mammograms and ultrasounds every 6 months for 2 years because of 3 lumps that were found. None have changed in two years so now I get to go back to once a year. Hurrah! Of course it was on the side that has my pacemaker and that makes it hurt even more when they press on that.
I hope the steroids give Far Guy some relief, you guys need to catch a break, as they say.
Blessings,
Betsy

I hope the steroids help with FarGuy's breathing!
Glad it was a cyst and not a tumor. Good news after a bad appointment day.
Love the clematis and wagon wheel.
Sounds like you are making progress on the Christmas ornaments. :)
Hope you have a quiet week.

Hope those steroids do the trick for him. Waiting in doctor offices just seems to be normal anymore. Very frustrating!

I sure understand your feelings about not being a morning person! For me the best part of retirement is not getting up before the sun! I am so glad you followed through and got the ultrasound to rule out any serious problems. These things are a hassle but you have to take care of you too. I hope the steroids help FG's breathing quickly. Keeping you both in my prayers!

Clematis looks beautiful. I am sorry about the mammogram being so bad. I wish they would just quit doing them and use sonogram all the time. I am not a morning person either. The new pup is challenging that however.

Glad it was only a cyst...hope your guy feels better soon. Our clematis like that hasn't started blooming yet. I don't think. Maybe I should go out and look.

My wife’s test for her heart seem to always bruise her and pain remains for days. Some technicians are good at but some think if they can’t get a good view, they should push harder. They don’t know what they are doing and they don’t direct the wand to the right area or angle. The waiting part is beyond frustrating. I hope all works out better for you and for Far Guy.

What a lovely photo. That one belongs on the front of a greeting card or stationary!!! Put that in my top ten favorites of your photos!

Praying for you both. When it rains, it pours, right?
Sending our love.

Not quite so fast here. The next X ray is a three dimension. Be on the safe side.

Damn waiting an hour to be seen is so annoying, I prefer morning appointments

Thank goodness for the cheerful clematis. We're due for a bone scan in September!

I am so not a morning person either Connie, and I have a couple of those coming up so I hear ya! Sorry about your cancellation and your waiting and waiting. Hope far guy starts to feel better from the steroids, very soon. Praying blessings for you both!

Right there with ya about not being a morning person. Ugh. I'm at my best from mid-afternoon to 1am. Keeping you and Far Guy in prayers. ♥