Why do hospitals and clinics use the metered water system in their bathrooms...wet ...soap up...rinse rinse rinse...that water does not stay on for the full Happy Birthday song that is playing in my head.

Why doesn't someone design a backpack purse with closures /zippers toward your back instead of out there where who knows who can unzip something.

Why are some "computer things" so complicated that it takes weeks or forever and ever to resolve problems..  Case in point...I set up Online Banking a month ago, as a test I paid two bills from it...electricity and the phone bill...Yes the bill was paid...but the money remains in our account.  "The Third Party" that takes care of this computer crap stuff says oh yes those bills were paid...and so do the payees...but the money has never left the account...so is it a bottomless pit of money?  The Credit Union knows there is a glitch someplace..a mystery glitch now over a month old.

Why is the Infusion Center located in between the hospital and the clinic where all germy people go...some idiot must have thought putting immune suppressed people in the germy area would make them more money.  Yes, since Far Guy has had four ports now...and each one has failed, he goes to the Infusion Center where he gets an IV every week for his Alpha-One Antitrypsin Deficiency.  We were both sick and tired of doing infusions at home when his port was not working properly...let the gals in the Infusion Center worry about it...after all they can start IV's.   It is still the pits exposing him to germs... but he likes the gals up there..one is the daughter of my cousin and another nurse is the sister in law of my nephew.  The gals take very good care of him and make him coffee. It takes real special Nurses to work in the Infusion Center...I just wish they were off in a building all their own or had a separate entrance. 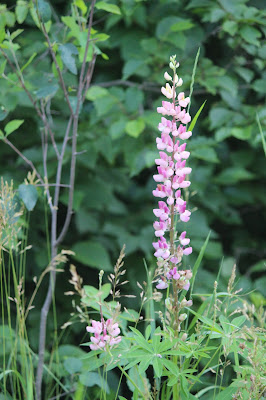 The last of the Lupines.
Far Side
Posted by Far Side of Fifty at 3:00 AM

Sunny you should mention the backpack purse with zippers toward your back. Only yesterday a video ad popped up on my Facebook for that ... it began with showing a masked man sneaking up behind a girl wearing the backpack and him becoming confused and running away after not finding any accessible zippers. It then showed the backpack in detail. I thought it was a great idea.

Ugh ... I should have proofread that better. "Sunny" was supposed to be "funny" ... oh well ... a little more sunshine is a good thing, right?

If you ever get the answers to your "Why" questions let me know. Sometimes I really wonder about things and I too ask why.

I just saw the ad again ... you can find the backpack at cityodyssey.com and search for their 3 Way Backpack Anti-Theft.


Interesting about your online banking experience. Wonder how long it will go before they fix it.

Is this something a home health care nurse could come out and do?

I am glad that those nurses take such good care of Far Guy. He's a very special person in many lives. I so enjoy his sense of humor on Facebook. :-)

Prayers for you. With your ideas, I think you should be running the world!

Good questions! The bank issue is strange and hopefully they will solve that quickly. I like online banking to pay most of my bills, but my husband still writes a paper check for his.

Yes but since Far Guy is not housebound we would have to pay about $350 or more a week for a nurse to visit.

Yes, it would be nice to have an endless supply of money for paying bills: I hope the bill pay glitch is fixed soon. I use Bill Pay almost exclusively and love it.

A lot of things make you wonder. You mention some very practical issues but the head honchoes missed them.

Because they'd rather people have to keep turning the tap on, than deal with the flooding from people who don't turn it off properly, which I know has been an issue in the past.

That would be a good idea with the backpack.

I had something like that happen with a bank once. Except I saw the bills were paid, and assumed I'd done my maths wrong, so when it finally got resolved I ended up shorter on cash than I expected to be. Glad things didn't happen that way for you, and hope it gets sorted out soon, and doesn't happen again.

I don't think they give any thought to where they put departments in a hospital. I think they just randomly asign them. Maybe they just write them all on bits of paper, label parts of a plan of the hospital with numbers from one to whatever, and then asign them to the sections based on the order they were pulled from the hat. First pulled out is number one, and so on. That certainly seems to be how things are set up in our hospital anyhow.

I've used on-line banking for years and sadly the money always comes out of my bank account.

I can only imagine how tiring all the appointments are and dealing with the inefficiencies of the health care system is obviously frustrating. There may be differences between the US and Canadian health care systems but navigating either seems quite similar.

Good, practical questions!
I'm glad they take such good care of FarGuy, though.
Sounds like you should check out the anti-theft backpacks. :)

There is such a backpack, my neighbor bought one while visiting China. It is small though and the zipper is inside against your back so no one can get at it!
I don't have much of an answer for anything else.

Yes the girls at the Infusion Center are special. They take great care of my brother.

I get frustrated with that water thing too. It never runs long enough to rinse well. MaryAnn found your backpack! Yay! I would love one of those when we travel. I get frustrated with our local hospital too. Chemo treatments right next to the Emergency Room where all of the sickies are! That's crazy! I'm sorry about Far Guy having to be exposed to those germs. I'm really glad he has nurses who care about him and give him coffee. :-)
I always wanted to be a nurse and to work in Hospice care. I'm weird. I know.
Blessings,
Betsy

Oh! That is a good one for the water theory. I hate it when people leave the faucet running, but I also hate the "shots" of water to prevent water waste. Barely enough time to soap up hands.

Can't help with the zippers. I would think if you are trying to unzip it for yourself, you would want them away from you. But I don't have a purse... I'll as my wife about that.

The bank. Oh! I know this one. They purposely leave money in there in the hopes you overdraw. We lost... wait for it: $750! Cheryl pays the bills with laser precision. The bank waits for you to overdraw and then hits you with fees. I was suspicious about this practice, until a lawyer wanted us to join their "class action" lawsuit for this very thing. Yes! The banks do this! You account is missing the money, the bills Have been paid... they just don't change the number on your little "online account chart". BEWARE! They will make up a reason... like: "it takes time for the computer to catch up." Or "It's a glitch." Totally bogus if you think about them for half a second. ( computers are fast! Hence the online payment, and what bank leaves a glich for several weeks?)

As for the Germs... Hospitals are germ magnets. Our sister-in-law is now a Germ phob.. since she works in the hospital. Lots of people with issues.. not all of them legit, come in there and freak her out. Ah, the Trials of Healthcare providers....

To clarify: the $750 were all overdraft fees that snowballed out of control. We paid it, but it hurt... A LOT! The first overdraft fee is $30, seemingly insignificant... the second is $100! ( may be differant if not 5/3rd Bank..) After that $120 and climbing! It quickly gets very bad. I doubt they change the practice. I mentioned your little story to Cheryl and she was just as passionate. Be careful and trust your math! A month is a very long time to be fooling around like that. Good luck!

Those backpacks themselves are not very safe. When we were in Bangkok they advised us to wear them to the front as they were often grabbed from the back. My bank doesn't have that problem. The money leaves as soon as I pay online!

You have very good questions and the backpack suggestion is genius! I've done online banking for years and I'm afraid they take my money very quickly. That is awful that Far Guy has had four ports. I don't blame you for going in to have it done but I understand the germ problems in his case. Does he wear a mask when he goes out? I keep praying that you guys get some good news soon.

You raised some questions that are so obvious to normal people...but the powers that be don't live in the real world. I always wonder that about back packs...I always want one, and even though I carry my wallet in my pocket 99% of the time...there are still other things I don't want someone else to get.

Interesting questions and I have no answers.

Oh Connie, such good questions with no solid answers. I pray that you both will stay healthy through these trying and waiting times and all your many appointments. God Bless You both.

I once had an unexplained $1000 deposit to my credit union account. They didn't know how or why but they wouldn't let me keep it.

My wife has all our bills for utilities paid automatically. With both places it seems to be working but it did take a few rough months to get it al straight. I always enjoyed seeing the lupins along the h highways on the north shore.

The infusion clinic where I receive chemo is isolated and separate from the hospital. As a retired RN I can attest it is the most carefully regulated germ-free environment you could get.

We once had $4,000 credited to our account in a credit union.(We have a balance there purely to have a credit card and we don't use it otherwise.) We called them every month to tell them it wasn't ours but it still took them an unacceptable four months to correct it. I assume somewhere another customer had "lost" the money credited to us.

I would start spending that money! It's their mistake...not yours. You can't be held responsible! LOL! I know what you mean as it does seem that common sense is in short supply in places. I will continue to pray that Far Guy stays healthy and you too!