In 1992 our oldest daughter became engaged.  She was a Student at the time attending Moorhead State University.  They would be engaged for two years or thereabouts when they got married in June of 1994. 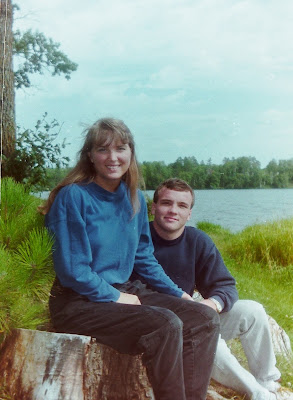 I took this engagement photo of them in 1992 at the resort on Straight Lake.  They went to the same High School and didn't particularly care for each other...then they met up again in College.

They would have celebrated 25 years of marriage last month, instead they are getting a divorce.

It takes two to make a marriage work.  I will venture to say that there are two sides to every story and they are both at fault.

We are sad for our granddaughters...but we are thankful that they are young adults and not small children.

In the "olden days" we would say that the children come from a broken home.
Far Side
Posted by Far Side of Fifty at 3:00 AM