Far Guy finished his book and gave it to me so I read it until I got so sleepy I had to take a nap. The book was called The 50-year Secret.  It was about a gal that was adopted and later in life discovered she had Alpha One Antitripsin Deficiency.

The kids were jumping off some cliffs or something that older folks wouldn't want to witness.

After they got back we went to the shopping district in Kona and I bought a small summer purse at a small shop owned by a fellow named Tony from Minnesota originally.  We met a fair amount of people that were originally from Minnesota or Iowa.  Some came, burned their return tickets and stayed.  Most said their family moved over also after a visit or two.

In the evening we played Cards against Humanity.  Much funnier than the sedate card game of golf that we had played the previous evening. 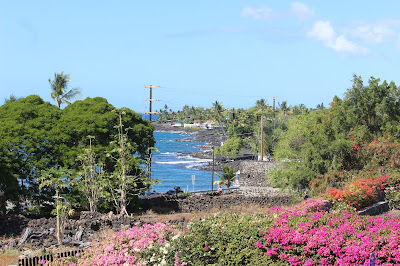 View from the lanai
One time during the afternoon Far Guy was trying to get his steps in for the day...he walked out on the south walkway...came back saying there was no way anyone could walk barefoot on that side of the building...even though the tile was a beige color it absorbed the heat.  We could see people barefoot down at the beach hot footing it to the shade.

The same little lady walked two dogs everyday...their feet must be really tough...although she let them walk in the grass part of the time.

You need sunscreen, hats and sunglasses on a Hawaiian vacation.  No need to pack many clothes either just go to the thrift shops or The Markets and buy muumuus!  Target had a huge selection of swimsuits and beachwear.