What an adventure.  I picked three different Fudge recipes to make for the Christmas cookie exchange.  I was nervous because some of my attempts at fudge have been spoon worthy.

The first recipe was a breeze.  I will make it again in a heartbeat.  White Chocolate Cherry Fudge.  3 cups white chocolate chips, 1 can (14 oz) sweetened condensed milk, 2 Tablespoons butter melt together stirring often (all the time) then add 1/2 teaspoon Almond Extract…I might have added more! and one cup of dried cherries chopped into small pieces. Stir well and place in 8 x8 baking dish that is buttered or use parchment paper. Chill. Easy peasy! 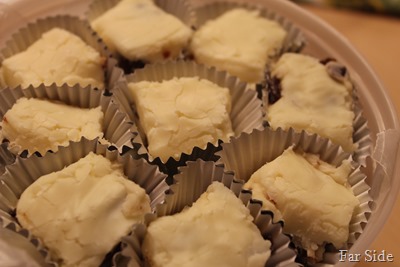 The second recipe had four different layers and each layer had to be cooled in between the next…what a putzy recipe.  It is called Caramel Peanut Fudge…but I used almonds.  I was anxious to get on with the layers so I started tossing ingredients for the layers in different pans…well that was a mistake because one of the steps had two parts…it should have boiled for 5 minutes…well that did not happen…hence that layer is a little lot gooey…but it is real tasty.  If I would have used the peanuts the recipe called for this might be real similar to The Pearsons Nut Goodie candy bar in the red and green wrapper that can be found near the checkout counter that is one of my favorites.

Far Guy helped me for a while before he got disgusted and had to have a nap.  I struggled on…and on..my fingers and every butter knife in the house was a sticky mess…but they are what they are and they are in their pretty little cups. 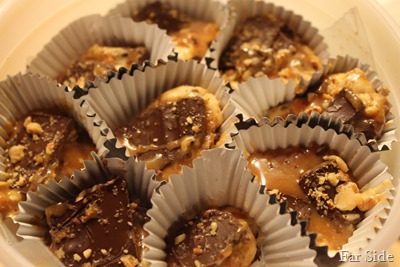 It has been renamed messy fudge.  If you keep it in the fridge I bet it pops right out of that cup!

The no fail old Fantasy Fudge recipe is one of Far Guy’s favorites.  I find it too sweet for me. (we have different palates) I made that one last and had to call Far Guy in to stir when it got too hard for me to stir.  That is the recipe that you have to boil sugar, butter and evaporated milk for five minutes without burning it and then stir like crazy to melt the marshmallow creme and chocolate chips.  I used dark chocolate chips and almonds because we like almonds better than walnuts. 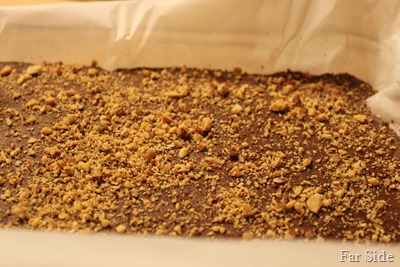 No Fail Fantasy Fudge in a pan lined with parchment paper.

About this time I am real tired of my fudge filled afternnon…this was the last pan to be dealt with.  Then I had a vision of the fudge in the candy stores…it is in big hunks. 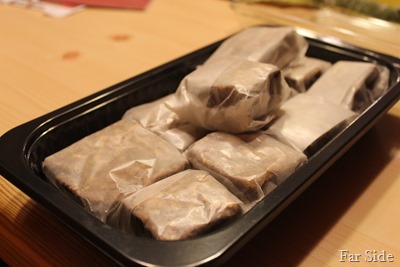 Well that works for me! I was out of pretty foil wrappers anyway.  An assortment of fudge will be packaged into 10 tins before the cookie exchange…for now they are chilling in the freezer and I am way tired of being in the kitchen.  Oh yes Far Guy has his own personal stash of his favorite fudge…I told him he could share if he wants to but not with me.

It is interesting that we rated the fudge exactly opposite of each other …with my fav being the White Chocolate Cherry then the Messy Fudge and lastly the No Fail Fantasy Fudge.

I checked all my ingredients and all of this fudge is gluten free.

Labels: Christmas, cooking with Far Side always an adventure