We finally got a little snow.  It has been snowing off and on since Sunday night.  We have about three inches total.

We are a Nusing Facility for an aging Boder Collie.  He is still weak after his bout with pancreatitis.  His diet is slowly being increased from just water to rice and boiled hamburger…and pumpkin.  He likes cooked carrots so some of them have been added to his food also.  He is REALLY hungry and he thinks we are starving him to death.  He wears his harness coming down the steps as his back legs are weak especially the right leg.  He is a pain in the neck when he wants food.  Far Guy made him some more homemade pumpkin treats with egg, rice flour and pumpkin…he likes them and knows they are kept in the fridge…and will lead you there. 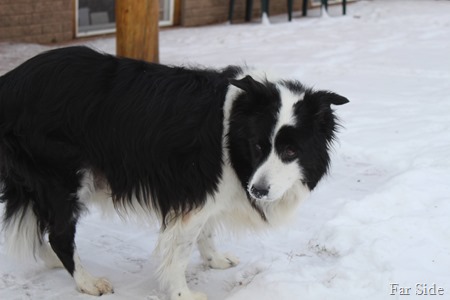 He is still eating snow.  He is improving..and those of us who are older know that it takes a little while to snap back.  He is going to the mailbox with Far Guy again…he refused to go for a few days.  So there is improvement.

We have a good friend who is a retired Veterinarian…he says we are doing all the right things.

I worry about Chance taking off to the woods to hide and die alone.  We had another dog that was close to death and she kept trying to hide in the yard and refused to come in the house.  So I am glad there is snow so at least we can track him.

Chance is over 13 years old.  He has been a good friend.  No doubt he will rebound this time but realistically we know the day when we say goodbye is coming closer every day.  So we will enjoy him while we have him.